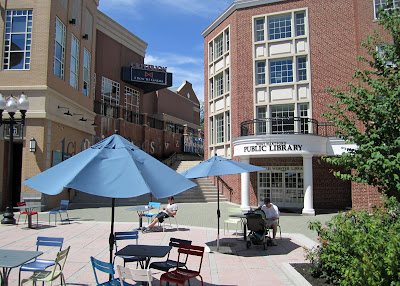 Blue Back Square is an area of perhaps 6 - 10 city blocks in West Hartford, which used to house several municipal buildings and abandoned automobile dealerships.  The developers cut a deal with the civic fathers to pay for relocation, reconfiguration and upgrading of the municipal buildings, in exchange for the right to develop the property more intensely.

On the right, you see part of the town's main library, financed and constructed by the developers, and on the left you see part of Barnes & Noble, the bookseller, with a courtyard between. Book borrowing on one side and book buying on the other . . . clever, isn't it?

BBS has retail stores, restaurants, services, apartments and condos, parking garages, a Whole Foods grocery store and even a small branch of Harford Hospital in a dense and walkable area.  The development was controversial initially, but now it is an essential part of the fabric of an expanded West Hartford Center.  I am a fan.

Why "Blue Back"?  West Hartford's Noah Webster published the Blue Back Speller in 1783, and most American children over the next century learned how to read and spell by using it.
Posted by Jack at 7:34 AM

Blue Back Speller-- never heard of it. Interesting and informative post.

The town and developers had to educate me about "blue back," too. Although, I do remember that the binding of the Webster Collegiate Dictionary that I had when I was in school WAS blue, though I never heard "blue back" used in connection with that dictionary.

Oh,your blog is very nice .I really like it ^^!