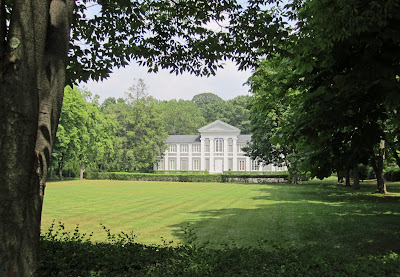 Chick Austin was a revered director of the Wadsworth Atheneum, Hartford's principal art museum.  Austin was appointed to that position when only 26 years old.  He was an innovator who expanded the museum's exhibition space and mounted shows as varied as Italian baroque paintings and Picasso.  Austin also championed modern music, bringing Stravinsky and Satie works to this conservative city.

Austin married into a moneyed Hartford family.  When in Italy on his honeymoon, he was attracted to the architecture of Palladio.  Austin and his wife built this house on Scarborough Street in the West End of Hartford.  It is very long but only one room deep.  The house is now on the National Register of Historic Places.  Austin's family donated the house to the Wadsworth Atheneum in 1985.
Posted by Jack at 10:40 AM