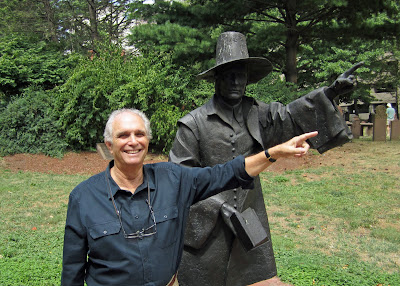 Ken Kahn is the former executive director of the Greater Hartford Arts Council, a non-profit organization that raises funds for the arts and heritage in central Connecticut.  It also produces arts and cultural events.

Hartford has an impressive inventory of monuments, sculptures, statues and other public art, much from the 19th century.  But, by the time Ken arrived in the late 1990s, budget pressures had all but eliminated new public art projects.  Ken breathed life into the effort, persuading and cajoling city and state officials, corporate leaders and private philanthropists to fund new art projects.  About 50 new pieces of public art in the past decade are Ken's legacy.

Every city needs someone like Ken. Nice with that dedication. And it's a fun portrait as well.

Yay Ken! Great profile and photo to go with it. side note: Good thing the statue's wearing a hat.