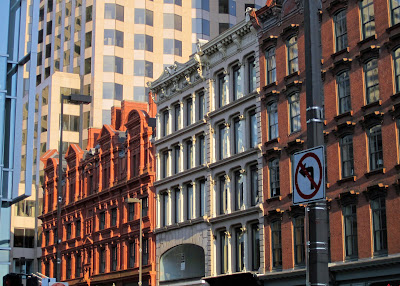 The bright reddish-orange brick, ornate building on the left is the facade of the Goodwin Hotel in downtown Hartford.

Our tax laws give breaks to developers who preserve historic buildings.  In this case, only the facade was saved.  The inside was gutted.  Above it rises a modern highrise hotel and office building.

Regrettably, the center city has been struggling economically, and the recession that began in 2008 accelerated the problems.  Today the hotel is empty, awaiting better times and a better-funded owner.

Here is a view from Bushnell Park.  You can barely see the historic facade that gave rise to the tax benefits, can you?

(A sharp-eyed friend points out that the close hotel occupies only the lower floors, and the offices above remain open.  Sorry.) 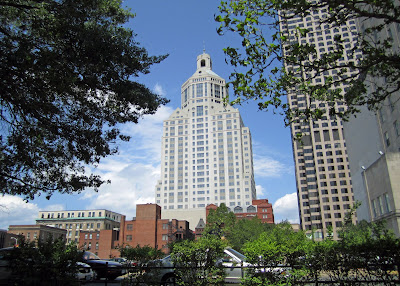 Well it's good to know these lovely façades are kept. I spent a whole month in Ridgefield once, when I was very young, but never made it to Hartford so I enjoy touring the city with you!