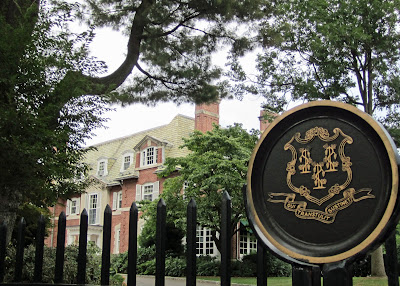 Prospect Street runs north and south, dividing Hartford from West Hartford.  The Governor's Residence is on the Hartford side of the street.

Governor Rell is not running for re-election, so she leaves office in January.  The residence is badly in need of repairs and was scheduled for a significant renovation.  The governor's chief of staff canceled the work because she didn't want the governor to be disturbed by construction during her last six months in office.

The building badly needs refurbishment and upgrading, and the best time to do it politically is at the end of a governor's term.  No incoming office holder wants to be criticized for spending to preserve the governor's residence when the state is in tough shape and there are other priorities.  But, the outgoing governor wants it quiet (naps?), so the work will be deferred again, and the residence will continue to deteriorate.
Posted by Jack at 7:52 AM

What a sad state of residence! It certainly looks stately from the gate, however.