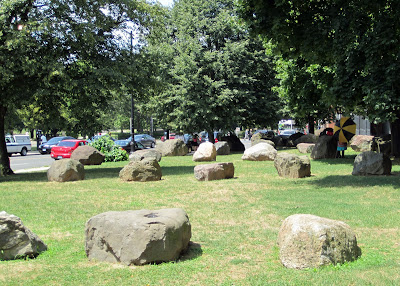 Now, you might think this is a bunch of rocks, but you would be wrong.  They aren't rocks.  They are sculpture.

In 1977 Hartford contracted to pay a noted sculptor, Carl Andre, $87,000 for an installation of 36 boulders on a small plot of land in downtown Hartford.  The project was funded in part by the National Endowment for the Arts.  Some narrow-minded citizens objected, and a controversy ensued.  Eventually, Andre was paid and the rocks -- er, the art objects -- are still there.  (I have become used to them.)

More people heard of Carl Andre a decade later when he was acquitted of charges that he murdered his wife by pushing her from the window of their 34th floor Greenwich Village apartment.
Posted by Jack at 8:01 AM