Hartford doesn't have a major league professional sports team these days.  From 1979 to 1997, the Hartford Whalers of the National Hockey League played here.

Hartford has never forgiven team ownership for relocating the team to North Carolina, but there are still many Whalers fans who harbor hope that they will return some day.  There is a movement underway (too long to explain here) aimed at restoring the Whalers to Hartford. 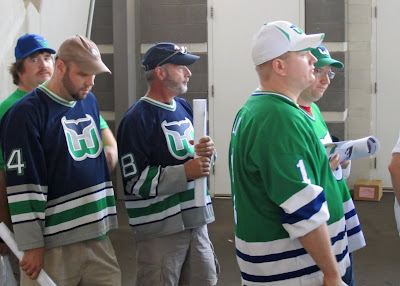 On Saturday, thousands of fans attended a special event at which former Whalers players were introduced to the fans and signed autographs.  The lines for autograph signings were loo-o-o-ng.  And, the loudspeakers blared Brass Bonanza, the team's theme song, continuously, which is nostalgic for many and annoying to others.  (I like it and the memories it stirs.)
Posted by Jack at 8:50 AM

You have an interesting blog.
Sydney - City and Suburbs

I must admit that they had a great logo for a hockey sweater!

I guess old fans never die, they just fade away.

Thanks for deciding to follow me. I've returnd the favor. Don't know much about Hartford, but I've been told it has a lot in common with Oakland. Now I'll find out.

Cool. A few of my childhood idols played for the Whalers. Two of them being the Abrahamsson twins. And later of course Ulf Samuelsson played for the team.