Statue on Grounds of the Capitol 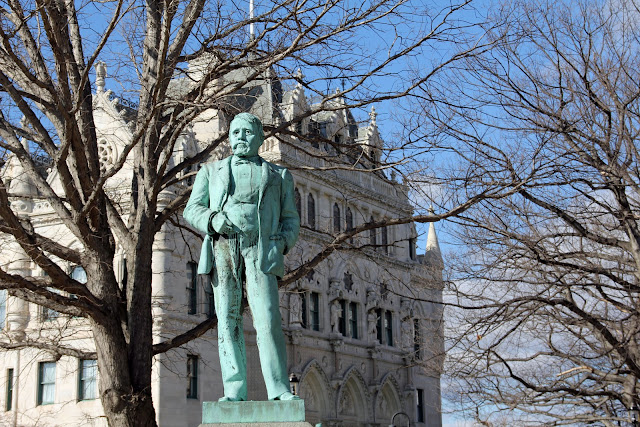 A nearby plaque describes Richard Hubbard as a lawyer, a statesman and an orator.

I like a guy who has the ability to reach the highest level and yet walks away because he doesn't like it.
Posted by Jack at 7:01 AM

Great composition of colors and layers in this one. Your background story really lends character to the photo.

That is certainly something to be admired.

Wish we had more people who felt like him these days...

Nice colors in this capture. If Mr. Hubbard didn't like Washington then, I wonder what he'd think of it now.

Terrific capture as always, Jack! And, oh yes, I do wish we had more people like him these days, too!! But I'm pretty sure he'd be nauseated with Washington! I know I am!! Have a great day!

He doesn't look like such a hugable guy either. But I'm sure he was a nice chap. And you do have to admire someone who does what they want!

Most one term Congressmen and one term Governors, or successful lawyers, do not warrant a statue. I wonder if he was honored for his achievements in any one of those endeavors or for the fact that he did not get captivated by the power of political offices and chose other challenges.

He looks quite distinguished to me!

It's a wise man who turns away from a life that isn't for him. I think you have to be prett passionate about politics to put up with all the downsides. I can think of PLENTY of politicians I'd like to see walk away!

Great contrast and juxtaposition! The building is gorgeous.

I also like this sate of mind. And I like the picture, this man looks so simple and the building behind so amazing!
PS: I see what you mean with the meme about doors.So let's go on this way!

Love these old statues! Good for him to quit at the top of his game.

He must have liked law work if not politics. I wonder what were the differences he found? I can think of a few! But I wonder what his reasons were.

Nowadays he would be a rarity, another beautiful statue!

The sculpture is beautiful and I love your composition shot!
Happy Easter dear friend,
Léia

If only the incompetent would know not to run again....

The statue is located in a great surrounding. The trees and the building behind the statue look artistic.

The patina shows off the nice details in this sculpture. I am glad you enjoy the music on my blog playlist. I listen to it quite a bit myself. Also, I used a texture from the Picnik photo site when processing today's Thoughtless Thursday photo.

The building behind is really overpowering for me. Nice shot.

Love the bright light - I agree with your assessment of Mr. Hubbard

A great portrait of that ol' fella! He looks very regal and important!