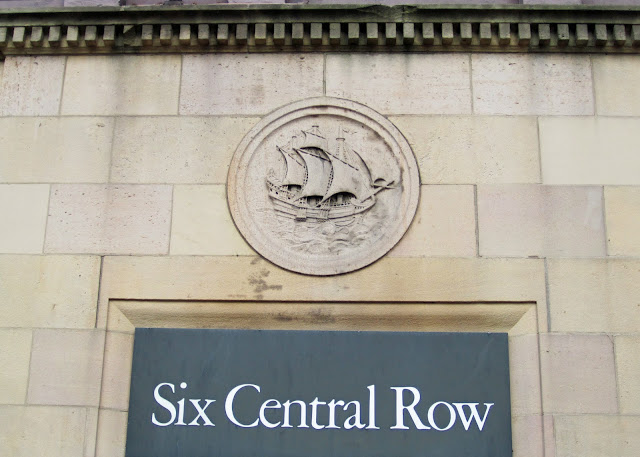 Advest was a very good regional independent stock brokerage firm that was based in Hartford.

OK.  You caught me.  I don't remember who bought them.  It was at least a decade ago.

Advest is still around as part of some big financial monolith.  And, their traditional ship symbol is still on a building on Central Row.
Posted by Jack at 6:30 AM

Including corporate logos into the design of a building often becomes obsolete with the corporate mergers and and acquisition that have occurred, as you post today illustrates.

This reminds me of the lobby of Phoenix Symphony Hall, which has signs acknowledging the contributors that paid for things like the chandeliers, etc. Almost all of the signs pay tribute to financial institutions that no longer exist.

I used to be a customer of Bancopoop, but they went down the toilet. ;-)

Looks like the symbol will be around a lot longer than the company!

That's a good looking logo. Either their ship came in...or they weren't able to weather the financial storm.

Excellent seal on the building!

And I don't think anyone expects you to keep track of corporate mergers!

The logo/symbol/seal (which is it) is very attractive.

This ship looks like the symbol of Paris: "Fluctuat nec mergitur.."

Very funny! It is difficult to figure who owns what anymore 'cause the names don't mean much of anything.

Well, there's still J.C. Penney stores. But off-setting that you've got Exxon. We know about J.C. Penny, but that in the world is an "exxon"? :-)