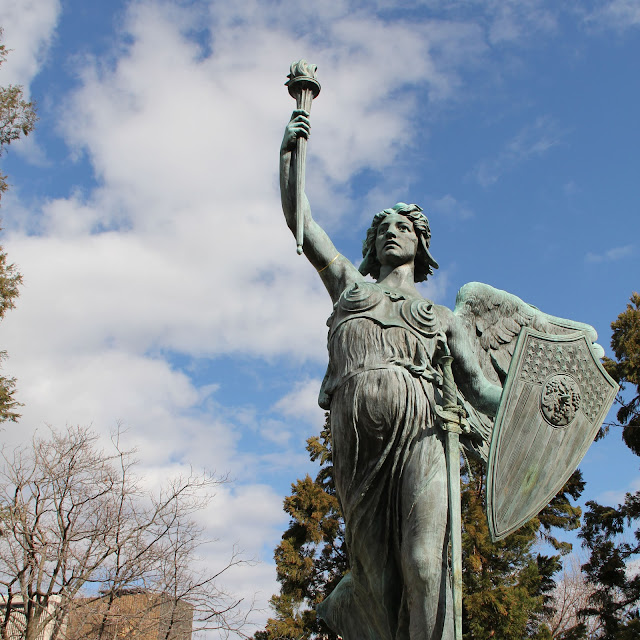 Spirit of Victory's dedication reads, “To commemorate the valor and patriotism of the Hartford men/Who served their country in the war with Spain 1898.” 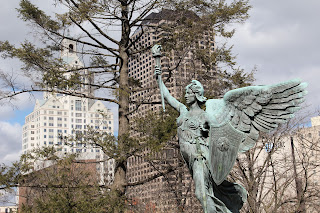 This memorial is on the eastern edge of Bushnell Park.  It was placed in the park in 1927.  The sculptor was Evelyn Beatrice Longman Batchelder, whose work I showed before.

Addendum:  Bushnell Park is named for Horace Bushnell, a 19th century Hartford clergyman.  The Bushnell in Florida's National Cemetery in Florida was a surveyor for the railroads.  (Per Wikipedia.)
Posted by Jack at 6:11 AM

I really like your statuary, it is mostly classical and quite old fashioned, which is a compliment in my opinion!

Wonderful statue. It seems to be in such good taste that it makes me think Hartford must be a classy city.

Very nice. This post has me wondering about the name Bushnell. There's a Bushnell National Cemetery north of Tampa.

I had the same question as SRQ. In fact, I'm going to be buried at the Bushnell National Cemetery in Florida.

Interesting sculpture. The war with Spain is another issue. :-)

Actually, it's call the Florida National Cemetery at Bushnell. We've posted a few photos from there on Florida Fotos - but that was a looooong time ago.

Hopefully, the Sox will carry 'victory torch' out West. Sheeesh. WHAT a start!

Marvelous captures, Jack! The statues are really beautiful! Like VP I love the classical, old fashioned look to them!

I do like this much more than yesterdays. She looks quite powerful.

Such dignified statues you have shown us. I really like that 2nd shot!

I like those kinds of statues, they are full of symbols, and have a great beauty.

Did Madonna get some inspiration from this statue in her past costumes?? :)

Seriously, it is a very nice piece. Although I wouldn't like to get a hug from her!

A great statue showing a powerful woman, but seriously the breastplate thing....who thought of that?

It does look like a strong, impressive statue but I confess I got distracted by the breast area. It doesn't look like it belongs with the rest.