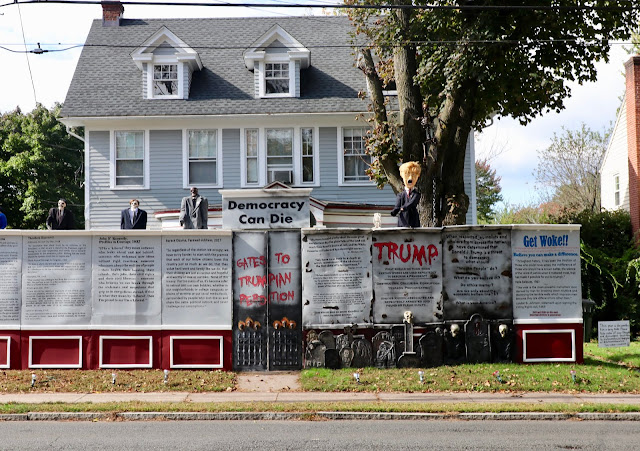 For several years, a homeowner on North Main Street has been putting on big Halloween displays.
Since the 2016 election, the displays have become increasingly political. 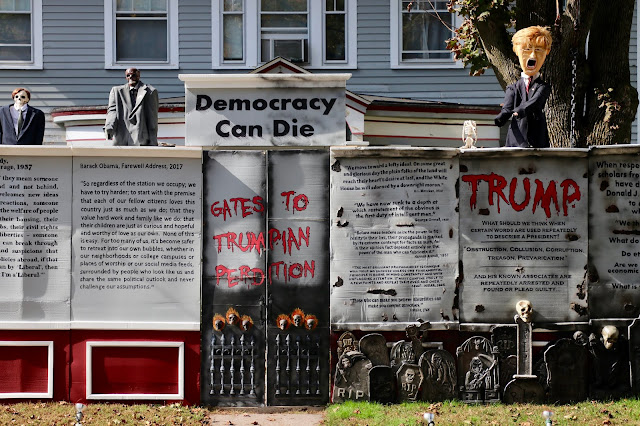 This year's main display has pages from Presidents the homeowner respects -- like Kennedy, Obama and Roosevelt -- on the left side, a variety of anti-Trump harangues on the right, and in the middle
"Gates to Trumpian Perdition" in the middle below a large "Democracy Can Die"sign. 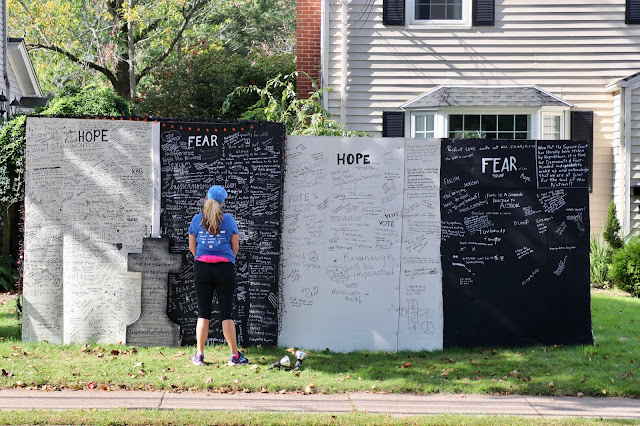 To the right are panels marked "Hope" and "Fear" and an invitation for passers-by to write down what they hope for or what they fear.  This young woman spent time writing on one of the panels.
She then stood silently reading what her predecessors had written.

And, oh, I just noticed that a few days ago I published my 3,000th post.  It was one with a Triumph TR6 with a "For Sale" sign on the windshield.  If I had been paying attention, I would have
picked a more special one.  Maybe the post with my granddaughters.
Posted by Jack at 5:30 AM

If Donald Trump should pass by I doubt that he'll stop to read the criticism. If on the other hand he does will he respond with an alternative display outside the White House?

I'm with the homeowner here.

Congrats on your 3,000th post, Jack! I've certainly enjoyed reading them everyday!
That is a brave homeowner!

I agree with the homeowner.

Congratulations on that milestone. I think I'd feel like that homeowner if I was American. It's all bad enough here - and that's without a creep like Trump at the helm. ( Ours are creepy enough!)

Odd mix of Halloween and politics. Not sure this is appropriate for a holiday for kids no matter how one feels about the current administration.

3,000 is fantastic accomplishment. I am looking forward to the next thousand.

CONGRATULATIONS on your 3000 postings!

Happy weekend to you and your wife.