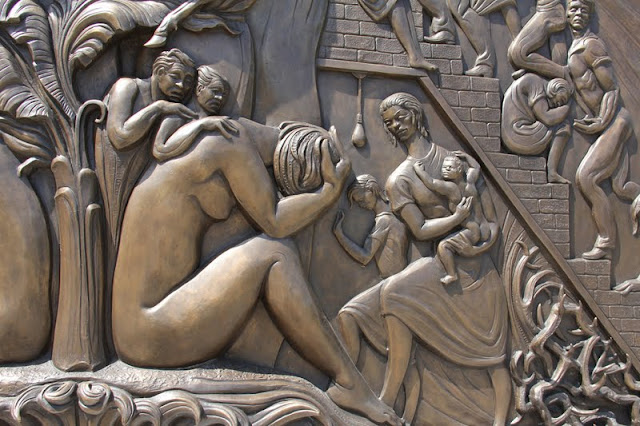 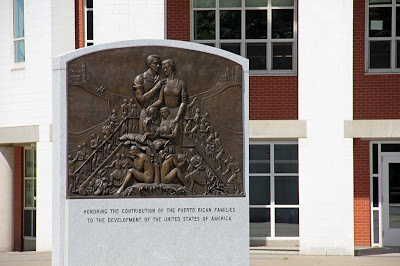 This sculpture was dedicated in 2009, to honor immigrant Puerto Rican families' contributions to America.  It was crafted by the Puerto Rican sculptor, José Buscaglia-Guillermety.
The statue is on the grounds of the Learning Corridor, a complex of magnet schools, including one for the arts and another for mathematics.  The Learning Corridor is in the south end of Hartford, the center of  Hartford's Hispanic population.

The photographs are from last summer, but I wanted to connect them with yesterday's post about the Hartford school named for a Puerto Rican hero.

Hartford has a relatively big and growing Hispanic population.  The current mayor is a Latino, as was his predecessor.
Posted by Jack at 5:30 AM

The detailed photo is great.

And it would probably even look good in black and white...

Very beautiful. And it captures the difficult and painful experiences of most immigrants to this country.

Nice sculpture, there's a lot to see in it.
God bless you!
Cezar

I cannot help but believe that there must be a connection between Puerto Ricans and Hartford, or at least there must have been a powerful person in charge who honors their contributions to our country.

The sculpture has a great deal going on in it. I absolutely love the portrait of ascendency, even if pain was involved; thanks for showing the whole thing, too.

It's a very poignant sculpture, and beautifully shown here, I agree with Steffe this would have been a good opportunity to experiment with something you're not comfortable with, come on Jack show us what you can do with this in B&W, even if it's just a small shot!

Birdman has a small brown bag, hmmm how interesting, packed lunch and a bevvy do you think??

p.s. and yes, it is great fun being a blonde!

I'm glad you added this post today. Explains a lot to me.

I, too, see a lot of pain. Such a beautiful sculpture and so good to see that these people have been and are being recognized for their contributions. Our country is what it is -- in a good way -- because of the contributions of so many immigrants from all over the world. Thank you for sharing this, Jack! I do hope you have a great day!

It's very moving. Thanks for highlighting this community. I had no idea they were so prevalent in Connecticut. But I think diversity only makes us stronger.

Impressive, but I do not see any monument of this kind in our near future...

Interesting portrayal. I think I'd have to view it in person to get a better understanding of what the sculpture was attempting to convey.

You have chosen some wonderful details on the top shot.

Love that you included the detail shot - wonderful work!

I'm sure the community is proud to have such a sculpture to connect them to the area.

A wonderful sculpture Jack ...and interesting to see the close up details.

These people had a hard time and (literally, according to the relief) a hard climb. But so many came north. It makes me think of the lyrics from West Side Story:

Immigrant goes to America,
Many hellos in America;
Nobody knows in America
Puerto Rico's in America!

Wow, this is a moving piece! So much emotion!

Puerto Rico is in USofA??? (Good reminder from Bob.) Some really good engineers I know are from Puerto Rico. They are smart and fun. I like your close up. Very effective. Wcry does the crying(?) woman represent? Looks like a man on the other side.