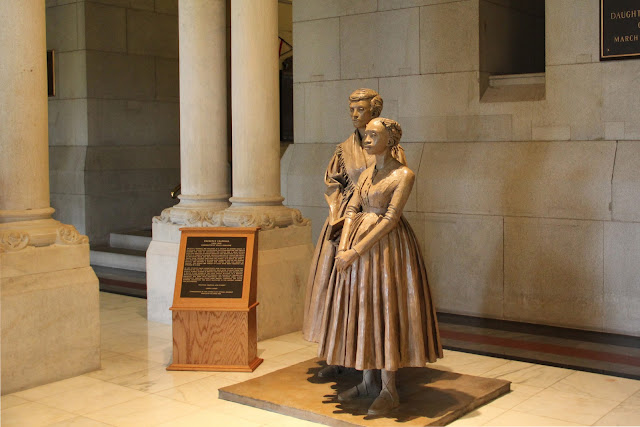 Prudence Crandall operated a school for girls in Canterbury, Connecticut.  In 1832, a young black girl asked Ms. Crandall to educate her.  Ms. Crandall admitted her to the school, creating a controversy.
The parents of all the white girls removed them from the school, so Ms. Crandall had to close the school.  When it reopened, it became a school for black girls.  Soon 20 African American girls from up and down the East Coast attended the school.

Controversy continued.  The State of Connecticut enacted The Black Law, prohibiting a school from admitting African American students without permission from the town.  A lawsuit was filed.  The school eventually won in the Connecticut Supreme Court, but the situation was still dangerous.  In 1834 Prudence Crandall closed her school and moved away.  The Black Law was repealed in 1838.  Many years later the Connecticut legislature attempted to compensate Ms. Crandall by granting her a small pension.  The school is now a museum.

The statute is near the entrance to the Connecticut Capitol.  It was created by New York Sculptor Gabriel Koren.  The statue is bronze but looks like clay. 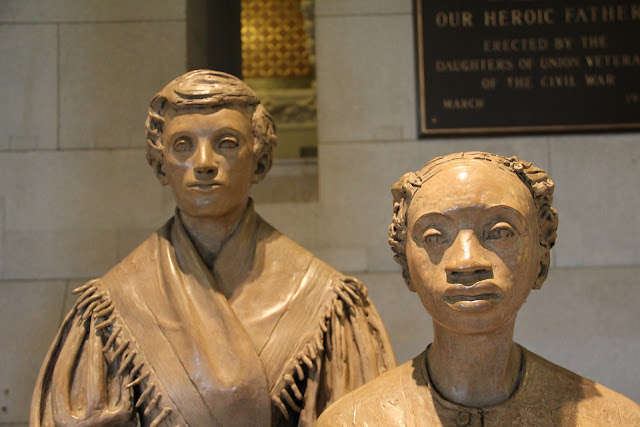 Wow. That is quite a moving story. We think of New England as being the home of the abolitionist movement, but it apparently was the site of deep and cruel prejudice as well. Of course the New England maritime industry made a lot of money on the slave trade.

An interesting and moving story, Ms. Crandall was a brave lady. I like the bronze, but really doesn't look like it!

Thanks for a bit of history this Connecticut native did not know.

Very moving bit of history. The statue is beautifully done. It's a good thing that there are people who will make huge sacrafices to make sure the right thing is done.

Thank heavens for Ms Crandall! It's so hard to believe not only African Americans but Africans also were treated so badly. When I first lived in Central Africa, they had Apartheid in South Africa, I never went there for that reason.Good post Jack.

Your story is one of courage in the face of ugly bias and discrimination. Stories like this create ambivalent feelings; pride in the people who face down prejudice at considerable risk and then shame for our country's history re blacks and indigenous people.

I wish that we could wipe away the historical past but I guess we wouldn't learn much from it, if we did. Thanks for honoring the brave educator who understood the importance of awakening young minds with this post.

what an incredibly brave woman to stand up for her principles, but what a sad tale. thanks for the story and picture

The statue is absolutely fabulous, so beautyful! I'm glad to see that tribute to a strong and courageous woman.Very interesting post!

A great story to go along with your photo today. I'm glad there have been good people who were strong enough to do what's right through the ages.

Such a wonderful and moving post for the day, Jack! A beautiful statue to begin with and how wonderful and amazing to learn there were people/women brave enough, strong enough to do and support the right things! We need all of those we can get -- today as much as then. Thank you for sharing this!

What a great story of a courageous women who was way ahead of her time fighting for human rights. Fine bronze statues as well. Thanks for sharing.

Interesting story Jack, I like the first photo very much!

It is good that there are brave people in the world or nothing would ever change! Wonderful post Jack.

We've come a long way but we're not there yet. Racism continues to stain our national life. It is good to recognize those who fought for the rights of all people.

What a great story of a brave lady. It's easy enough to look back and see what was right - much harder, often, at the time to make those choices.

I find it so interesting that back in this time period there was such progressive thinking and someone who attempted to embrace equality.

Those names... I grew up with a girl called Faithful. She wasn't!

Makes me cry. Well done to honor the month.

What an amazing story!

Great story... so much history we don't know...

We all need to hear these stories, both to educate and inspire us.

A great woman and one who should be better known. Thanks, Jack, much appreciated.

A beautiful story and I love the last shot, the sculptures are wonderful!
Léia

Jack, I read somewhere that Tennessee legislators are attempting to erase references of slavery in American history books, which I think it's preposterous! Do you know if this is true?

Stories like this leave me in awe of the courage of so many people who have quiet footnotes in our history.