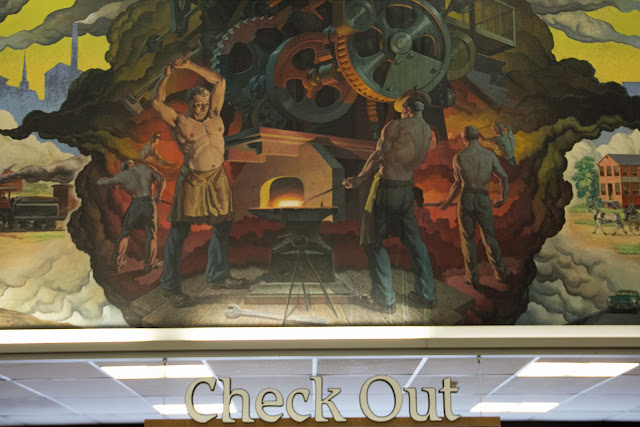 This large painting hangs over the "Check Out" counter at the New Britain Public Library.  It was painted by Sanford Low and Walter Korder.

Low was the first director of the New Britain Museum of American Art.  He was a Hawaiian who was sent to a Connecticut prep school, which he hated.  He ran away and enrolled in the Museum School in Boston, where his passion for art emerged, as did his knack for cultivating relationships with rich folks.  He married the daughter of a rich New Britain family and moved there to build his art career.  This mural was painted in the 1930s, Low's first decade in New Britain.

A decade later he became the NBMAA's director.  When he began, the collection had 24 paintings.  By the time he died in 1964 after 25 years as director, the museum had more than 1500 works of art.

This is linked to Monday Mural.
Posted by Jack at 5:30 AM

It is great when art collecters decide to share their collections with the public.

Beautiful photo of this great painting, and thank you Jack for the interesting informations.

Very industrialist and muralist! Thanks Jack.

This post reminds me of the work of Mexican muralist Orozco, a contemporary of Diego Rivera. Check him out; interesting artist and his murals are astonishing.

I love your photo...so much going on in it!

You always have such interesting posts, Jack, as well as terrific photos and this one is no exception! Marvelous painting! Hope your week is off to a good start! Enjoy!

Beautiful mural! I'm still thinking about how a Hawaiian adapted to to life in New England.

It has a 1930's feel to it. Hard, physical labor. Perhaps it serves as a motivator for those visiting the library to study hard...and get an office job.

Nice story, thanks for sharing.

It sounds like he found his 'calling' and did a great job as director of the museum Jack.

A little jolting to see the "Check Out" under the painting with no other context! I love it - an image that piques your imagination! But thanks for the real info.

I love everything about this painting - so powerful and filled with energy and beautiful colors!

It makes me think of soviet murals in the times of Ussr..

This *is* very much 1930s but as an European it reminds me a lot about dictatorship painting style...

I'm thinking he would have been way too creative to enjoy prep school. He sure had talent!

It's a fantastic mural, very powerful! Also like the clever way you composed the shot, Jack. Thank you for the information on an artist I never heard of.

Excellent composition in this painting.

Welcome to Monday Mural, Jack. A sensational post. I'm a fan of the 1930s style which underscores the "can do" attitude that marks our national character. This painting also represents the awe society held for the explosion of industrialism occurring during this half of the 20th century--even through the Depression. I could go on and on but probably should simply say thank you for participating in this week's Monday Mural.

You crack me up Jack, I've just seen your comment on my post today hahahaha! your reputation still stands!!

Looks like a WPA-style classic. The painting reminds me of the images around the ground level gallery of Coit Tower in San Francisco.

This is some mural. I've never seen anything like it in a library. Very nice! I like hartford's support of the arts. :)

Looks like he could have had Birmingham as an inspiration.
V

A powerful piece of artwork Jack ....and great to read the background of this talented an innovative man.

Walter Korder was my great uncle. He was from Hartford and has a number of murals and paintings still hanging in Connecticut. He and my grandfather painted the mural at the Webb House Museum in Weathersfield.