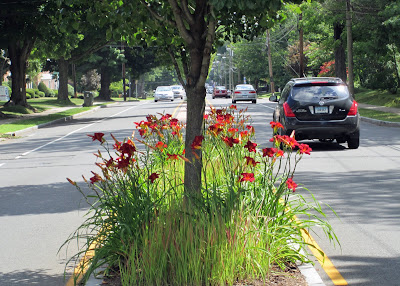 For decades traffic engineers widened roads and added lanes, to speed traffic from the suburbs into the downtown.  In recent years they realized that speeding cars were threatening neighborhoods.  So, several of our main traffic arteries have been redesigned to narrow the traffic flow to one lane in each direction, with landscaped traffic islands separating the lanes.  Space for bicyclists and parked cars has been added to the right lanes.

I don't know whether the commute to and from the downtown is now any slower, but the drive is certainly prettier, the stress is lower and the neighbors seem happier.
Posted by Jack at 12:18 PM