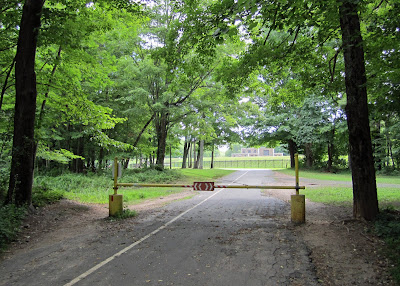 The Metropolitan District Commission manages a series of reservoirs atop Avon Mountain.  The reservoirs provide drinking water to cities and towns in central Connecticut.

A side benefit of its mission to protect the watershed is that the MDC also maintains parklands and trails for walking, running and bicycling around the reservoirs.  Hundreds use the trails every day.  Now the MDC is threatening to close the trails, because the jury in a a recent trial awarded an injured biker more than $2 million.

The plaintiff was an experienced biker.  She was riding a mountain bike and was going in the wrong direction.  (There is a marked bicycle lane with frequent directional arrows.)  She ran into a stationary, closed gate.  The gate is painted bright yellow and has been in that location for nearly 40 years.  It has warning signs posted on the side that faces riders who are going in the right direction.  (And, the gate didn't jump out in front of her . . . it stayed where it was and she just ran into it.)

People are outraged, of course, at the jury verdict, and are worried about the possibility that a wonderful recreational area might be closed.  Hundreds attended a public meeting this week to urge the MDC to appeal the verdict and keep the trails open.
Posted by Jack at 8:26 AM