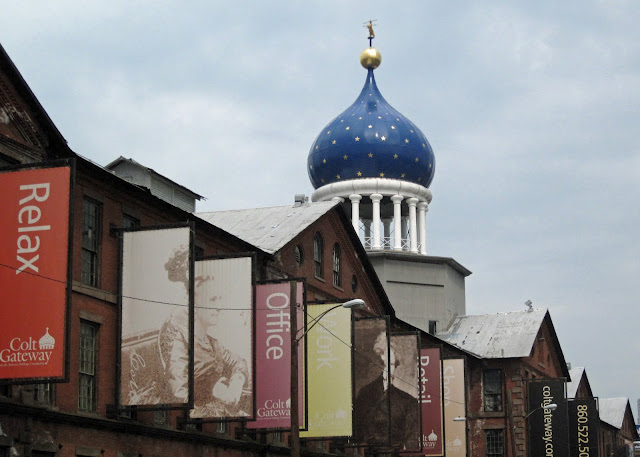 Samuel Colt built an armory in the mid 1800s along the Connecticut River to produce his pistols.  He topped the building with a conspicuous blue dome with gold stars and a rampant colt with a spear.  No one really knows why he picked such an unusual feature for a conservative New England city.  One theory is that he had visited Russia and liked the similar bulbous domes on Byzantine churches.  Another theory is just that he wanted to catch the attention of ships arriving in Hartford along the river.

Today the Colt complex is in tough shape.  It looks like local marksmen practice their aim by breaking windows in the lower levels of the buildings.  Colt has seen repeated efforts to revitalize the area, sometimes as space for artists and more recently as leased space for small businesses.  It is in a very visible location adjacent to U.S. Route 91, but most of the buildings remain abandoned.
Posted by Jack at 9:04 AM

That is such a shame. The bright blue onion dome is lovely, though you're right that it's unusual to see it in CT. I hope that the district gets revitalized in the near future.

Welcome to the CDP community, Jack! I am looking forward to seeing and learning more of Hartford through your eyes.