Ridgefield is an old New England town.  In the downtown, many structures that were originally residences have either been moved or repurposed to make way for business and commercial uses. 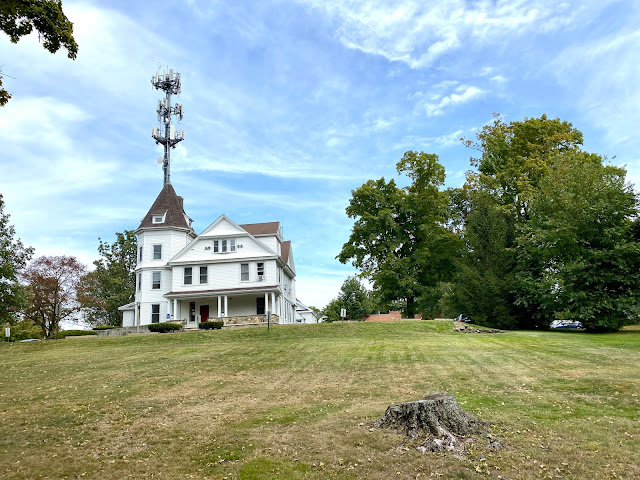 On the hillside above East Ridge Avenue stands a large Victorian-era building that was once home to George Lounsbury, who had served as Governor of Connecticut.  In 1925 the mansion was bought by the State of Connecticut to house the Troop A Headquarters of the State Police.  The State Police moved out in the 1970s and the Town of Ridgefield bought it and renovated it to serve as the town's police station.
Posted by Jack at 5:30 AM

Beautiful building and good that it is still used. Sadly these days our communications masts, vital though they are, do little to beautify our surroundings.

There is so much land around it, Jack! A pity about that tower.

I agree that It's good to see an old building kept up, and still in use, though the view has that old stump to show that there still are changes happening to the land around the house.

Nice place to be a policeman. I think I'd sit there all day and let the criminals get away with it!

The local police have a stylish building for their offices. Good to see the old house put to good use.

Quite a different use for it.

You found the perfect angle to shoot from.