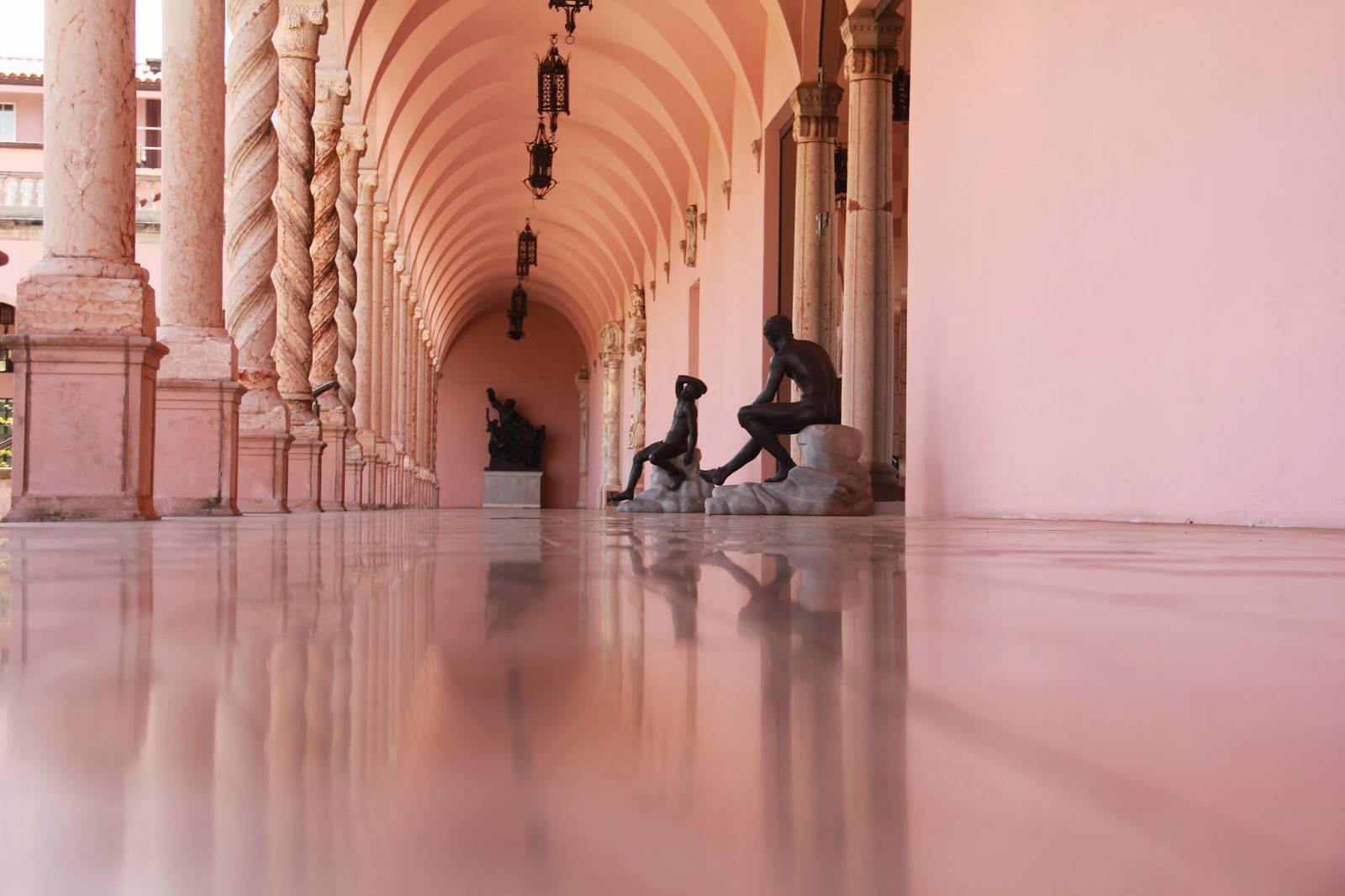 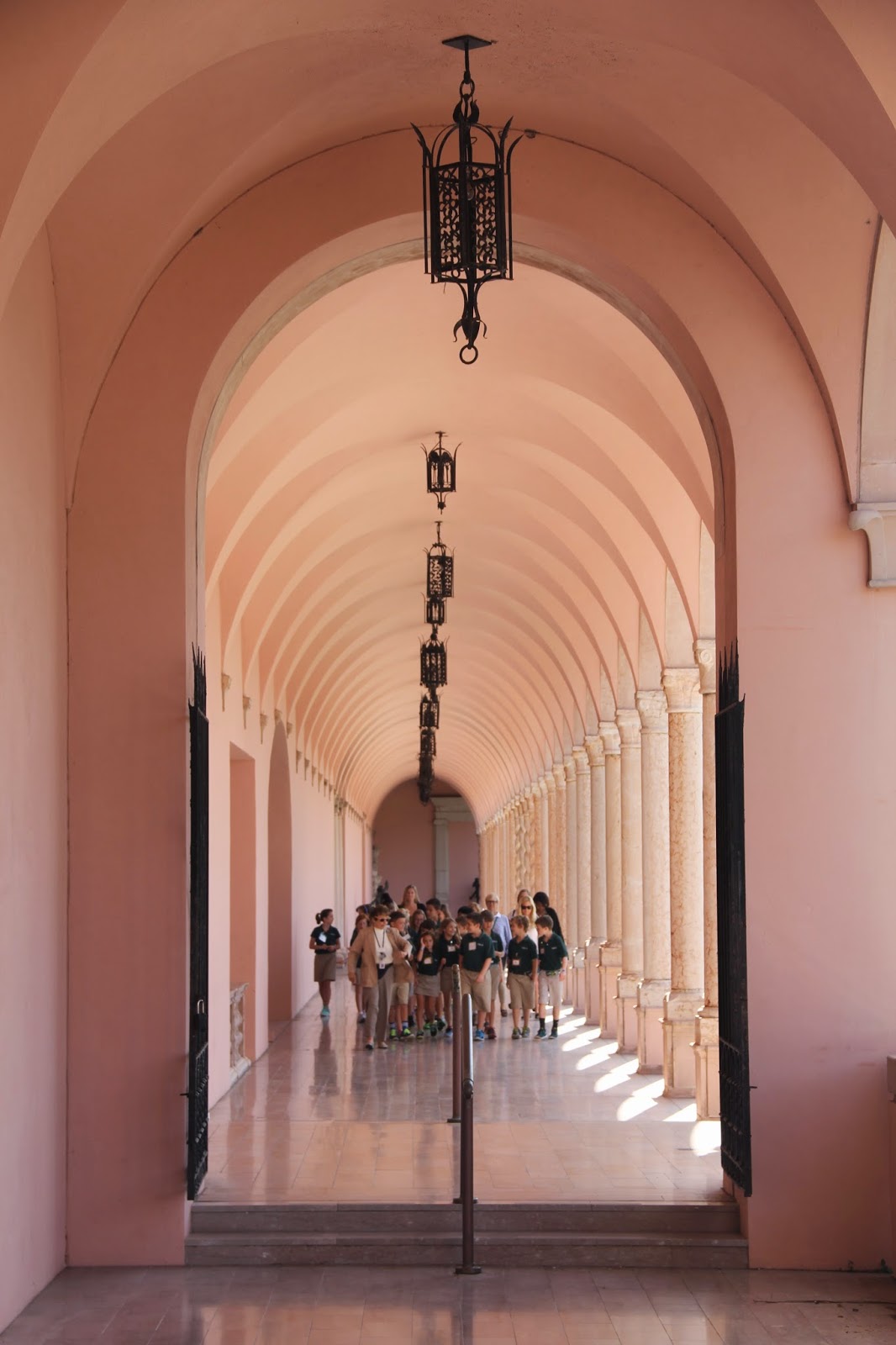 The Ringling Museum of Art is in Sarasota, two hours north of Naples.  It is Florida's state art museum.  The core collection was formed by John Ringling -- the circus impresario -- and his wife, Mable.  The strength of the collection is 16th through 19th century European paintings (Rubens, Hals, Rembrandt, etc.) and classical sculptures.

Ringling encountered financial reverses in the Depression of the 1930s.  When he died and donated his estate and collection to the state, he was nearly bankrupt.  Decades of legal battles and neglect followed,.  Finally, just 12 years ago,  the State of Florida kicked in some serious money, private philanthropists matched it, and the museum has been given the support and care it deserves.

These two photographs were taken in the loggia, above the lovely sculpture gardens.  On one side, two statues sit beside the doors into the galleries.  On the other side, a group of students on a field trip came toward me.

There is a tie to Hartford.  The first director of the Ringling Museum was Chick Austin, who had earlier been an innovative director of Hartford's Wadsworth Atheneum.
Posted by Jack at 5:30 AM

The thing that impresses me is cleanliness of the museum. That floor is just spotless!

Absolutely beautiful, as was your inspired squares yesterday.

The clear, clean, classical lines of the architecture contrasts nicely with the gaggle of schoolchildren.

So elegant and pretty! Great place. I think it is great when pupils and teachers leave the school and explore what is outside. Not all families take their kids to museums etc.

such a beautiful museum! great shots!

The arches with the black lamps marching in line down the center makes a very interesting photo. Your second photo and yesterday's "squares" did not post for me.

Finally worked; must have been on my end.

I suspect the pink color in your photos would only be found in a Florida building. Somehow it is appropriate for Florida, but not in other places. Lovely photos.

I love these shots, Jack! What a space that is!!

What a beautiful, elegant museum and your captures for the day are superb, Jack!! I would truly enjoy visiting there! Hope you're ready for a great weekend!! Enjoy!!

Gorgeous photo! I would love to visit this.

Wonderful photos of this exquisite architecture!

I am not sure if I like more the architecture of this building or your great pictures of it!

Two great shots but the one on top taken from floor level is fantastic.

Love the POV in the top shot!

Wow, this hall is incredibly beautiful - I can just imagine how the inside must look like. Since I love art, you know my point of view about the use of money put into renovating:)

Great shot from a low angle, Jack. The pink hue is pretty and different, it nicely softens all the symmetry.

I wonder who is cleaning that floor???? Good that it is not me!
Great reflections...

Beautiful! I must admit, I'm surprised that a circus founder would create something as lovely as this. It's excellent that the place is now being taken care of.

Lovely! I remember being there many years ago.

That really is a beautiful place.

lol, i had to come back over and see what i said about cars, i was really on a roll haha...actually my mini van is the first vehicle we have paid off and kept! it's a great feeling not having a car payment...i dread the day it dies...i hope "betsy" gives me a couple more years!

Oh wow, that is a beautiful museum. Both shots are great but I really love the first photo. It is sad that it took so long for the museum to get the TLC it needed.
Have a great weekend!

For sure a place to visit.

Love, love, love your low angle in the first photo!

Love to see pics of my city on your blog -- and read everyone's nice comments about your photography! Whenever I'm at the museum, I take photos of this area. But, I've never come up with as nice a shot as your low angle POV. (How did you get all the visitors out of the way??? They seem to stymie me.)

I see arches, many arches.. arches make me so happy. I hope the schoolchildren appreciate the arches as much as I do Jack :)

My goodness, Jack, these are amazing shots. Love them!

the museum looks very fancy!
im not sure we ever passed sarasota, but i never read about this museum. i like to see all your pictures