I don't give out much personal information here.  But, last year I opened the window
just a little bit and showed you my newly planted hydrangea hedge. 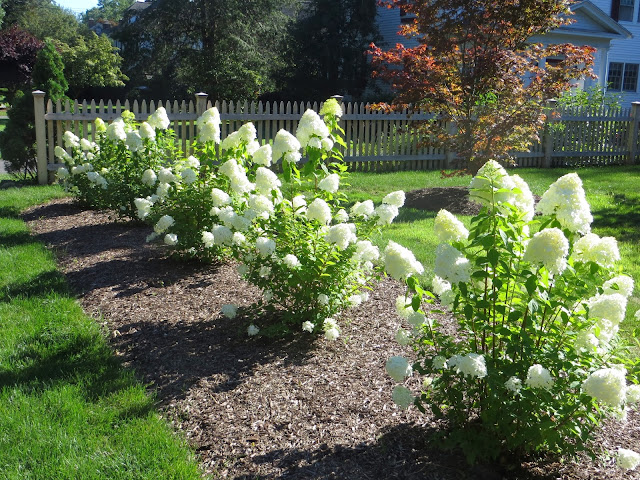 Rolling forward, here it was eight months later, in July, when the flower heads were white. 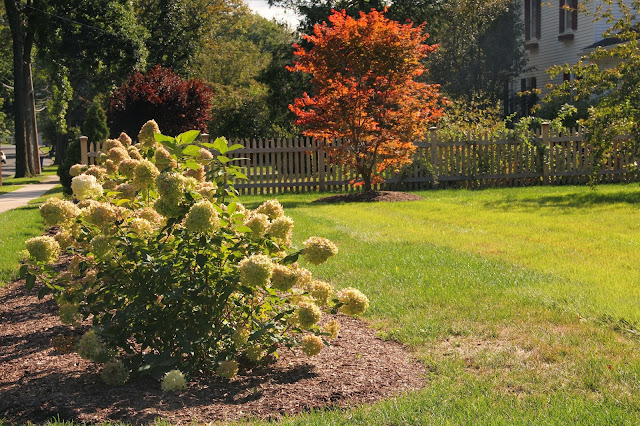 And here it was in September, when rose and burgundy began to appear in the flower heads.
Don't the new fence and Japanese maple set it off nicely? 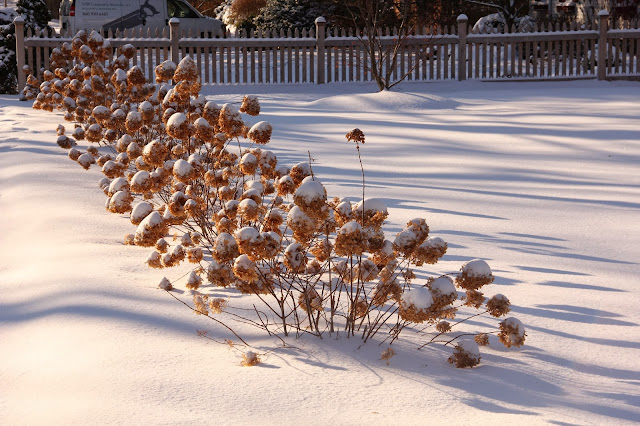 And here it was last week before the snow melted, still looking good with brown flower heads,
when most of the garden has given up for the year.

The hedge did well in its first year.  Give it one or two more years
and it should be completely filled in.

The January theme for City Daily Photo bloggers is "Photo of the Year."
Posted by Jack at 5:30 AM

Looks nice. What we call a hortensia.

I love this series - seeing nature evolve with seasons is always magic. I hope you're enjoying a lovely festive season.

And yes, our train stations are paved in gold here :)

A good series to watch nature at work.

Hydrangeas are a wonderful choice for a hedge, Jack.

They look great, Jack! I love the look of a mass of the same plant but I'm too much of a plant collector to plant like that in my own garden.

The 'circle of life' shown here. Good work. Didn't know you had the green thumb too.

I love hydrangeas and that makes such a beautiful hedge!! Great pics for the day as always, Jack!! Enjoy your weekend!!

Nice series with "then and now", I like the snowy one :-)

A great time-lapse reportage. I wish well to your plants!

Very nice! Isn't it nice to see a project come to life? The winter flower heads look like they all have little white caps on in the snow.

Very pretty!
I am partial to the Autumn and Winter shots but I think the Winter one is my favorite. Love the contrast of the flowers against the snow and all the shadows.
Have a great weekend!

I've wondered how your hedge was doing, Jack! It seems to work in all the seasons.

I think both of these seasons have something going for them. Beautiful images as always Jack!

Hydrangeas have something positive to give in all seasons. Love the way they look in winter. Great series, Jack!

A lovely hedge, already! And, even in winter.

Oh, I love hydrangeas! They are beautiful.

Beautiful in all phases.

Wise move about your personal info. The photos still give me no clue about your street or location. Your profile conceals your handsome looks. :)

lovely!!
and i like to see some snow. im pretty sure we wont get any anytime soon....

Plants that give great value in every season. One of the things I enjoyed about New England was the lack of serious barriers around people's homes. Unlike here, I saw very few high fences and impregnable hedges. A border of hydrangeas seems perfect to delineate the boundary.

It's looking good in any season, Jack!

I love o akleaf hydrangeas and I like your variety too Jack. Good move and the three seasons photos are great. I recently photographed a friend's garden every month for a year. I got real partial to the things that were dying and drying.
V

Super! Love the progression from snowy white to under cover of snow. Just love it!