A Stroll through Blue Back Square 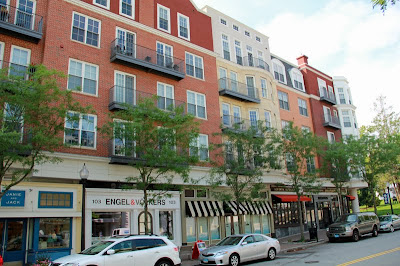 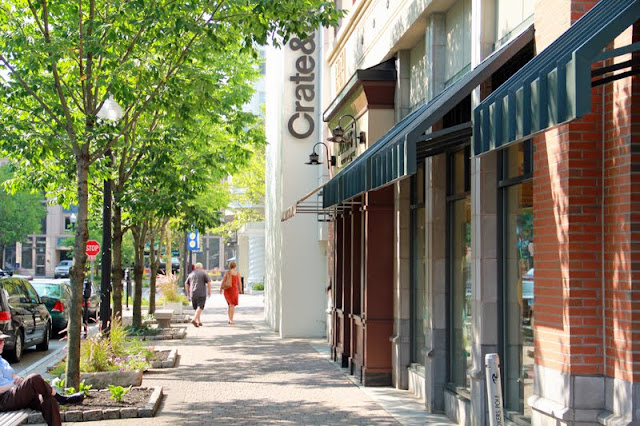 Blue Back Square has been mentioned numerous times in this blog, but I haven't shown it yet.  It is a mixed use development that extended West Hartford Center by 50 percent, east of the original West Hartford Center.   It has first floor retail and upper stories for condos and commercial uses.  The retail is a mix of national and local retail stores and restaurants.
Key to its success was persuading the Town of West Hartford to turn over some 1920-era municipal buildings to the developer and, in return, relocating municipal services into new buildings on the outskirts of BBS.  The development incorporates an eclectic architectural style, to suggest that it grew over time rather than being all built in one year.  It works.
I took these pictures before most stores opened for business.  Normally there would be plenty of shoppers.
Posted by Jack at 6:43 AM

so interesting, jack. and in your opinion the re-purposing of this area has worked?

Oh I LOVE these buildings! It really does look like it grew over time. Very clever way of marketing the area :D

Interesting look/feel (love seeing the Crate & Barrel!) Mixed use developments seem to be barely holding on here. Before the real estate crash, seemingly every development here had a housing element. But, then, it was discovered many people didn't want to invest hundreds of thousands of dollars to live over a noisy cafe, next to street traffic. It takes just the right urbanites who want to live in a mixed use development.

A very charming street with beautiful buildings! I like a lot the different colors and the romantic balconies, I think this place is perfect for walking ( and I see a bench there as well, great!).
Thanks for this tour!
Léia

This concept of recreating the feel of a little commercial district, rather than an enclosed mall, is a growing retail trend. There is a mixed use development in north Scottsdale that is very successful. It also has a Crate & Barrel, I believe. It may be the only place in the metro area where there are condos located above stores.

Looks like a perfect place for stroll and shopping:)

Mixed use, I love that, totally love it. But what sort of buildings were torn down, I'm wondering.

And I adore those two women in your post yesterday. A photo of confidence--thanks, Jack!

I think that I could adjust very quickly to a residence in an area such as this. It would be very convenient for those of us who are downsizing. I like the development you photographed.

Looks like they've very successfully achieved what they set out to do Jack, it's a very appealing complex and I should imagine perfect for young working couples.

Grew over time neighbourhoods are much more charming. Generally speaking, those which grow like mushrooms can be so uncharacteristic.

If I were there, I'd have to pop into the Crate and Barrel store. I can always find something I "need" in that store.

I love that type of shopping area that have been built/grown up over time! So much more interesting than being all built at the same time, as you have written. We have some of those here in Seattle and they're always fun to visit! Terrific captures as always, Jack! Hope your week is going well!

The colours in first shot really look like the ones we have here in south of France.They make the towns look more happy and welcoming, don't you think?

It looks like a nice place to stroll, especially with those trees providing shade on the sidewalks.

I wouldn't have guessed this was all new-build. It looks pretty good. Now I want to know what they sell in Crate and Barrel!

Looks like my kind of place. The style of grew and changed over time is quite popular with interior design.

Crate and Barrel! I am so there!

This sort of development makes urban living much more appealing for people, especially as fuel prices go up. I think there's a trend now for older people to want to return to cities where more amenities are located. This one looks much better designed than so many.

Nice place, beautiful buildings. I like to take pictures when nobody is around...

Love this! Ocala tried a mixed-use development in the downtown area, but they got the wrong developer - he got it partly done and then quit, absconding with the money! Sheesh!