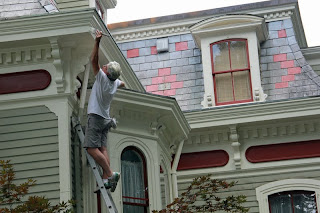 Yesterday was fun, so, I rescheduled the planned post and will play with my painter some more today.

4.  Nita suggested I use the rule of thirds but put him on the left side, to show more of the wonderful house.  This was actually my first crop, which I abandoned because I thought the painter was falling out of the picture.  What do you think? 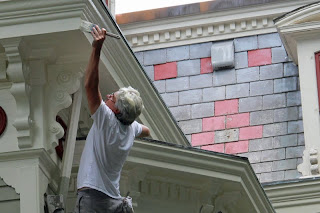 5.  Maybe the story is the painter, not the house.  So, I should come in closer.  I will use the rule of thirds again. 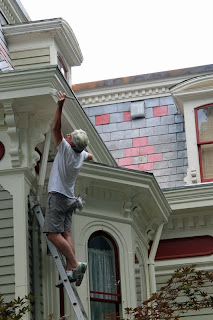 6.  But, if the story is the painter, maybe I should go vertical and show all of him, still with the rule of thirds, but putting him on the left this time.  I do get more of the house details, which viewers can enjoy until he topples out of the picture . . . 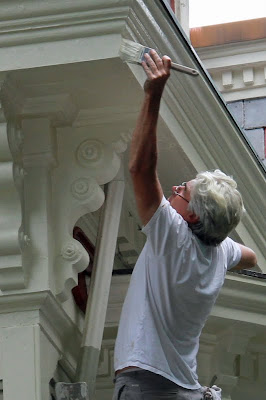 VP suggested that the house is tilting.  I made a couple of attempts to straighten the image, but I was looking up when I shot the picture, so one plane or another is always going to be askew.  I don't show these here.  Sorry, VP.

4. The painter is falling. ...falling "out of the picture" is neither here nor there.

5. The painter is suspended. Is he standing on something secure? (hah)

6. One foot on the ladder and one arm draped over the angled roof? See #4... The painter is going to "topple"

7. The painter is left-handed but where is this? More house, please.

9. Stay off the ladder and make sure your homeowners insurance is sufficient... when he "falls" or "topples"

Very creative and I love this building.

All I can say is "I hope his medical insurance is all paid up." It better be. He's almost hanging from one arm. Must enjoy heights!

I think a rotate clockwise 1° will do...

I wouldn't like to feel this pain in his neck he will probably feel tomorrow, but still do love all the photos:)

Amazing. I hope this is a homeowner doing the painting. If this is professional painter, OSHA will be paying a visit to his employer.

I agree with you on yesterday's number 3. It shows the full scope of the image, how small he is compared to the house and it seems to emphasize the precarious position he is standing in. Or, should I say, hanging in. I assume no one hurt in the making of this photo series! ;-)

You have started my day off with a laugh and a pain in the neck!! I hurt just looking at this guy!! He's either in very good shape or crazy! Yes, I too, assume that no one was hurt in the making of this series! Have a great day, Jack! Stay off the ladders!!

love this very last one. looks as if he's conducting a symphony.

It's so nice to know I'm not the only one hemming and hawing over which way to crop a photo! I like the couple with him on the left, whether vertical or horizontal. Of course, I really like the last picture too. There's never one right answer, or we'd always know exactly what to do! But that's part of the fun of it, eh?

Was it Shakespeare who wrote something about "much ado about nothing"?

I still vote for yesterday's #2.

And I still think he may fall off the ladder before this discussion is over! :-)

Thanks Jack for continuing this series. I agree the 4th crop isn't the one, it does look like he is falling out of the frame. The 7th is a great focus on the painter but being a lover of architecture I have to stick with number three. You have convinced me of the benefit to doing multiple crops.

Thanks for stopping by SFDP, if you get a chance to visit SF I hope you can enjoy one of our many outside dinning experiences.

I like today's first shot the best. Always stick with the rule of thirds. And I don't think he's falling out! :)

I agree with Birdman. Brave guy!

My arm is beginning to hurt!

I wonder if the painter has the faintest idea of what's going on here... :-))) I like all the versions, Jack.

There's not a bad one among them - but it's interesting how the different crops focus your eye differently and tell a slightly different story. Me, I like yesterday's vertical crop - somehow it conveys the feel of the str-e-e-tch best.

Today I like #4 and here's why: Yes, the painter is the story. You can see/feel the precarious nature of his balance (leaning, stretching, one foot wrapped around the other, holding the house with his free hand) and you can see how large of a project he's working on. Yep....#4 it is!

Oh my gosh... that fellow on the ladder makes me nervous! Great shot...

Come on Jack. Really, the story is the photographer! Great commentary. And, by the way, I think the painter looks like he's hanging on for dear life.