Morley School is an elementary school -- kindergarten through fifth grade -- with unusual white gothic features and bright red doors on the entrance to its auditorium. 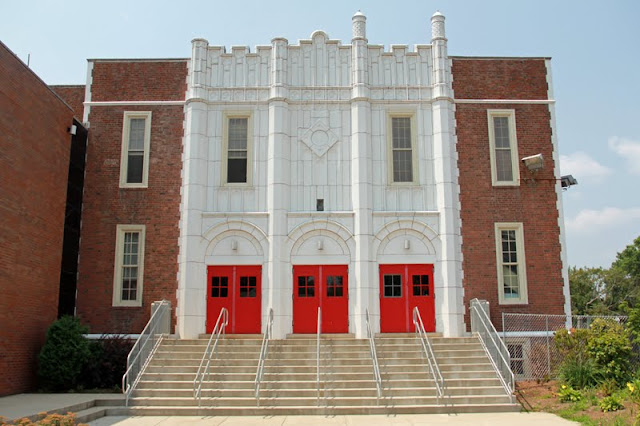 The school's principal, Dr. Ellen Garber Stokoe, was Connecticut's 2010 principal of the year.  She was honored at the White House along with the representatives of 49 other states.  Congratulations, Dr. Stokoe.

Morley School was named after Edward Morley, an eminent physicist who grew up in West Hartford.  Morley's work on the speed of light was a foundation for Albert Einstein's theory of relativity.

And, my kids both attended Morley School.
Posted by Jack at 5:51 AM

Bonjour!
It's a very nice entrance and I love the symmetry of the red doors,they are beautiful!
Léia

A quite strange, but not unccractive building, the bright red doors are amazing...
I still remember Edward Morley from when I read a lot more science than now. I didn't know he had a connection with Hartford.

Those red doors really do mark the entrance. I think it's a very good way to make the entrance inviting and attractive. Congratulations to Dr. Stokoe.

good energy in that place, i think. did your children go into the sciences?

I love the red doors. Must be a good place if you sent your own kids there. :)

Didn't you get that 'order of importance' in the wrong order Jack haha! Very impressive looking school, did you children enjoy their years here?

Kudos to that principal. It is a tough job. Love those red doors.

Congrats to Dr. Stokoe! I love the architectural details of this school, Jack! Those RED doors remind me of the RED doors on my blog today for "Ruby Tuesday!"

My first reaction was "What a cool-looking building!" It is warm and welcoming and very attractive. Sounds like it features a worthy principal, too!

Looks like someone took some time when designing this building. Interesting columns too.

It is an impressive building Jack. I do like those red doors!

This is an interesting building. When I look at those red doors, I can imagine them flying open and kids spilling out and down the stairs.

Wow, what lucky children you have to have walked through that awesome entrance! My girls' soon-to-be elementary school isn't nearly so grand, but it is just a few blocks down the street, which is a good selling point.

What a marvelous looking school! I love the red doors! And, yes, congratulations to Dr. Stokoe! We do need more like her! Hope you have a great day, Jack!

That's an elaborate school, wish we had such architecture here. Speaking of school, I'm back this week (teacher) :(

This building is amazing - I love these red doors!

A good looking school, I love the red doors!

I've seen schools with two entrances - one for boys, one for girls. But three doors?

Hmmm, this is a beauty that looks more like university!

The last fact is the most important!

It appears to be so well maintained! It's a handsome building.

One for boys, one for girls, one for teachers? Most unusual facade. If it wasn't for the steps, it could be a fire station. Ours have red doors.

Looks like an great place to call my school. I'll have to mention to my son about the connection to Einstein, he would be interested.

OH now this a school i'd love to teach in every day. Trois portes rouges..........bien sûr!!! Congratulations to Dr.Stokoe. We need to celebrate our teachers and administrators. Nobody knows how hard they work unless you've walked a mile in their moccasins!

Such a stately building. The modern looking red doors suprisingly look really good on the building. Congraulations indeed to Dr. Stokoe.
Reminds me of the photos I took a couple summers ago of the High School in Rye, NY which my mother-in-law attended. It's a gorgeous structure. And it also reminds me of my Luther Burbank Jr. High in Highland Park (North-East LA) which I attended and which was subsequently torn down in '77 due to earthquake standards (the crazy thing is that there seem to be no photographs of the old building in any archives). I'm glad Marshall High School (http://johnmarshallhs.org/album/14886.jpg) was preserved (and has been used in many movies & TV shows.) ... you took me down a long trip down the memory lane, part of the pleasures of blogging.

I like the symmetry in this shot. Are those doors always so red? Or did they just receive a fresh coat during summer vacation? Students can't say they couldn't find the door....

Love the contrasts on this fantastic building! Clever architecture.

Wow. That is some impressive school!