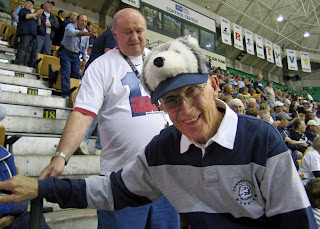 The Connecticut women's basketball team played in Tampa last night, beating South Florida by a score of 80 to 54.  This was their 85th consecutive win.  It is the longest winning streak in women's college basketball history (two consecutive undefeated seasons and wins in the first seven games this year).

There were more UConn fans than USF fans, even though the game was at USF.  Many retirees support the team and southwest Florida is teeming with Connecticut retirees in the winter. 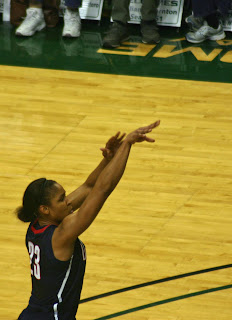 Maya Moore is the star, averaging 26 points per game.  Last night she had 14 points, which is good for most players but not for her.  At the next game she plays, her 9th point will make her UConn's all-time leading scorer, and she will still have about 30 more games to play before she graduates.
Posted by Jack at 8:12 AM

That is quite a record! I love seeing all that 'team' support.

Glad to see that some women's sports are getting plenty of support! That's some record.

Glad you found the answer to your CDP portal problems!

Wow what a record. Love fans and their hats.

Very cool to see that kind of support for the young women!
BTW - I've been meaning to leave a message and let you know that you have a wonderful blog here.