Elizabeth Park after the snow 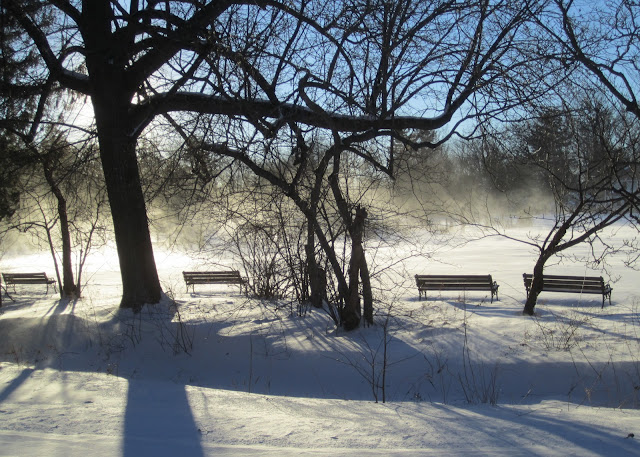 The blizzard is over.  In Hartford, it wasn't as bad as the forecasters predicted.  The snow was only 8 - 10 inches, but the wind continued to blow so there are drifts.

It was much worse south of Hartford.  New York City received 29 inches of snow.  Most people in Hartford stayed home on Monday, so the roads were surprisingly empty.  I had fun.
Posted by Jack at 6:13 AM

29 inches?!!! I've been thinking of all my blogger friends along the east US coast. Since you dared venture out, you were rewarded with a very pretty picture - but stay safe.

That wind would probably blow right through your coat. Amazing.

This looks freezing! I cannot imagine 29 inches of snow.

I can see the wind whiping up some snow in your shot.

The title threw me for a split second, because we have an Elizabeth Park too... but it doesn't look anything like that, especially currently! I've been thinking of all my East Coast friends. Stay warm and safe!

The photo s lovely Jack, and it's nice to hear that you had fun:)
Hope the worse is over!

The joys of winter and an absolutely marvellous shot too.

Wonderful capture. I love the sunlight on the freshly fallen snow and the stillness of it all with the empty benches. With this photo, I gather you're back from Ft. Myers?

There are some advantages to a storm...one is that it keeps people off the streets for a period of time and can offer great photographic opportunities as you show us in this delightful photograph.

The last big storm I remember being in personally was in Chicago in 1967...I was in graduate school working at an oil company at night. It started to snow when I went to work in the evening. We got 24 inches, I believe. Shut down the city. I didn't get home for three days!

At the moment Florida might be cold, but I'll stay here anyway. :-)

Be careful, though...we don't want to hear about any frozen fingers or toes!

I'm glad you can see the fun in all that snow. I believe you actually have more snow at the moment than we do here north of Toronto. The Nor'easter didn't come this far inland, although we did experience winds coming from the north caused by that storm. Brrr.

Not far north from you in Franklin County, Mass, we only had a bit more snow than you. The wind was viscious yesterday!

Regarding your question about how to join the nymph party - I suppose you could always ask the satyr. Though I'm guessing the nymphs have their own side of the story. ;-)

Only 8-10 inches! That would be a major blizzard here! It's very pretty.

Wonderful capture of the wind! Looks cold, but incredibly beautiful!
I love the empty roads.... when all others are too chilled to venture outdoors:)

The weather this winter is certainly capricious! Did you shovel or snowblow, and, if so, was THAT fun?! Before the snow gets dark and dirty, it certainly is pretty, tho, but I'm tired of it already yet months still to go!

Very nice photo. I am thrilled that it's over and that you got out to take photos. For me, that's the only way to enjoy snow like this.

Jack,
__The weather at the Cape Cod area too, rather
-growling- this past week!
__Love your photos, they... of such familliar places to me. Memories... from Avon Mountain to the (once) JJ Fox & Company!
__I was brought up in Winchester, and now at the Cape, I still live just moments away from route 44.
_m

What a nice view! Here a scarce inch of snow lasting a few hours was almost a tragedy, bringing the town to a stop. I guess you are much more prepared to this...

This has been on the news in the UK the past few days, putting our own recent snow in perspective.

The wind effect on the snow is fantastic. Great capture!
Wish you a Happy New Year, Jack.

Lovely shot! Nice for a conclusion of a storm.