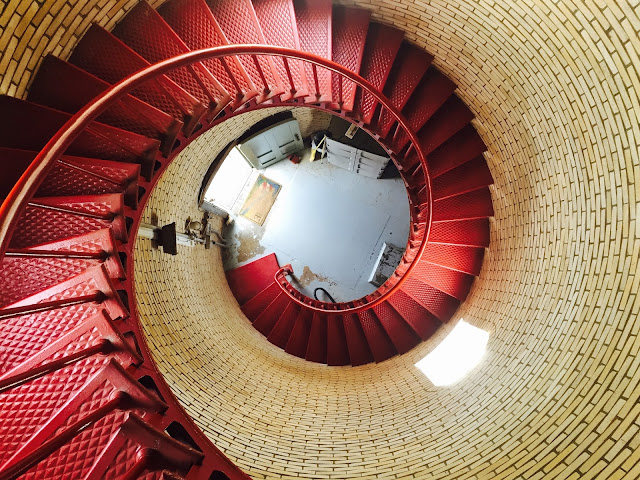 Nauset Light is the middle of three lighthouses on Cape Cod.
It was built in 1877 as a spare for the one in Chatham, and was moved to Eastham in 1923. 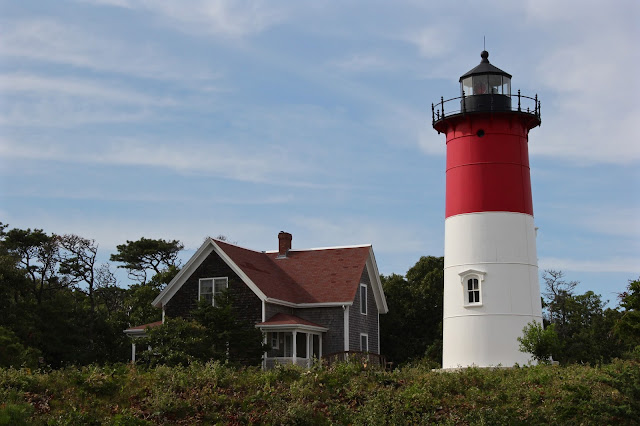 Erosion is a serious problem at this location.  In 1996 erosion endangered the lighthouse,
so it was moved once again, 300 feet inland across the road. 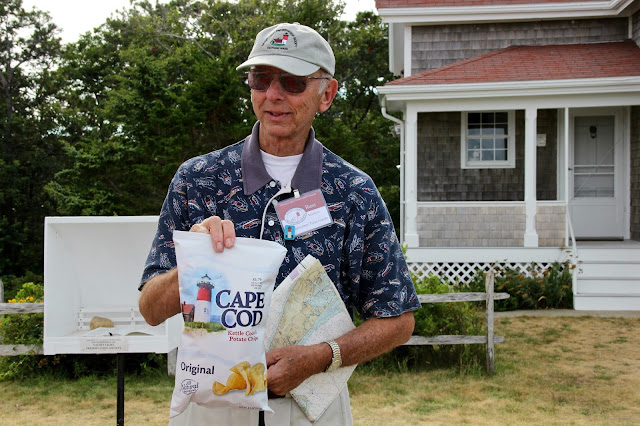 The picturesque lighthouse and lighthousekeeper's house are shown on many things,
including Massachusetts license plates and the bags for Cape Cod potato chips.

Absolutely stunning shots. Love the red staircase as well as the lighthouse.

I agree with Mersad about the staircase... stunning. The details and the contrasting colour make for a incredible eye candy shot.

The staircase shot is really stunning and lighthouses are so fascinating to me.

Your first image is a real showstopper. It is stunning.

We had a family reunion at Cape Cod many years ago. Love the place.

I have an old passion for lighthouse and for this kind in particular. I like that the building is kept so well, and your image of the stairwell is simply amazing. I would also gladly try those chips...

The first shot is such an incredible one! Just so beautiful...

I am fascinated with lightouses and have a huge coffee table book of them. Have to check to see if this one is in it and I bet it is. Love the spiral staircase photo and so glad that you pointed out the image on the potato chip bag, especially since it is one of the brands we enjoy.

Like VP I'm a sucker for a lighthouse of any shape or age, this is a beauty! Gorgeous first shot Jack, bit of a worry about the erosion though, quite a problem close to the sea.

What task! Moving a lighthouse back then or now. Don't tip it!

I've seen those potato chip bags! Thanks for showing the real thing.

I can't imagine moving a lighthouse!

Awesome captures for the day, Jack!!! That staircase truly took my breath away!! Thanks for a great start for my day!! Hope you have a wonderful weekend!! Enjoy!!

We have those crisps here. They are over priced though...

The staircase shot is mesmerizing... and I love a good lighthouse.

Woah, that staircase makes me feel dizzy even looking at your photo. It is a very picturesque lighthouse, famous, as you say.

Your shot of the staircase is just perfection.

I've seen it on the potato chip bag. Your first picture is fantastic!

That first shot is truly glorious. Our New Dungeness Lighthouse interior is so different - the bricks aren't exposed as beautifully as these. And the grey stairs are truly ho hum compared to this stunning red.

I've always wanted to take a photo of a spiral staircase from above. So far, it hasn't happened, though. Even though I'm not good with heights, I would make the attempt.

I love that stair photo!

Never been to a lighthouse. They sure are photogenic.

Great happy Crowd. Did you see the commercial with the girl who is 10. She is always sleepy head and never gets up in time for school.

Her Mom hired a group to come in her bedroom and play all these kinds of instruments and wake her up.

Did she wake up. You bet And did she never sleep in again. Nope. She made it in time for school.

Now that is an idea for kids who like to miss school on time. Call the music maker group like these guys. They make the money and Mom has her work done for her.