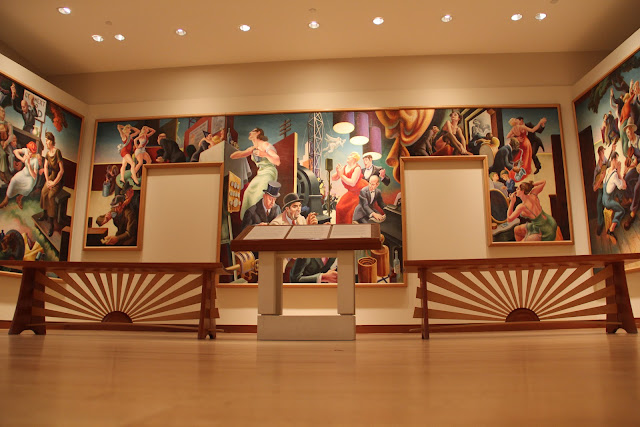 Thomas Hart Benton painted during the Depression.  Though schooled in France and acquainted with modern art trends, Benton rejected them in favor of a brightly painted style honoring ordinary Americans engaged in the everyday activities of life.

This mural -- The Arts of Life in America -- was commissioned by New York's Whitney Museum to fit a parlor in the museum.  In the 1950s, the Whitney decided that it wanted to devoted the space to modernist art by painters like Jackson Pollock, so the New Britain Museum of American Art acquired it for $500 and has shown the mural in its own room ever since.

I showed part of this mural before.  One of the things I loved when I saw it again in December was the pair of benches that, to me, enhanced the setting.
Posted by Jack at 5:30 AM

As benches addict, I agree so much with you! I like this kind of painting, very colorful, joyfull, alive!500$ only?! a good deal!

I remembered this mural immediately. Very memorable. I like the low angle point of view. Were people wondering what you were up to?

New York's loss was Hartford's gain. I believe Thomas HArt Benton was from Missouri, but did not know he studied in France.

This is a good way to display the mural. My wife and I are admirers of Howard Cook, a member of the Taos Society of Artists. He painted a series of murals around the doors and windows in the main lobby of the main Post Office in San Antonio, just a block from the Alamo. Maybe they should move them to a museum where more people would see and admire them.

Great colorful painting and I do love the benches!! Great, colorful shot for the day, Jack! Enjoy your weekend!!

Jack, that mural is a jewel, and so are the benches. Always loved Thomas Hart Benton's work. Thank you for posting your photo.

I have to agree with Dave on Hartford's gain. To me, this way more appealing than any Jackson Pollock. When I first opened your page, it made me think of Diego Rivera and one of Maxfield Parrish's paintings. I'm not sure why but it thought of "The Pied Piper" that hangs over the bar of the lounge at the Palace Hotel in San Francisco.

These are paintings I could sit and study for a long time, so full of life and colour. Good job they put those benches there.

Great photo, Jack. I've long had the New Britain Museum of Art on my list of places I must visit soon. Now I have even more incentive.

Fantastic! Love how you've shown the benches too, Jack.

I know very little about benches, but I have always liked Mr. Benton's work - the bright colors and clean lines.

Nice job on the benches.

Interest that the backside of the benches are below the seating area. $500 was a real bargain!

Some beautiful work of his on the IU campus too.

Beautiful benches! I love so much the lights in this image, awesome exhibition!
Léia

The mural is marvellous Jack, wouldn't mind sitting on this fabulous bench for a while and take it all in!

How fabulous this is!