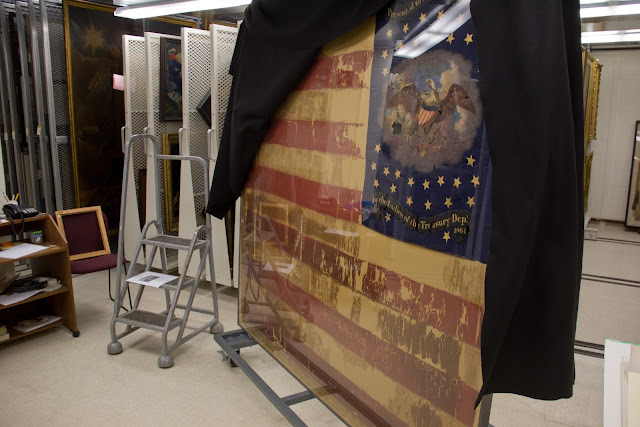 On the day President and Mrs. Lincoln were going to attend a performance at Ford's Theater, the theater's manager borrowed flags to decorate the President's box.  He borrowed this one from the United States Treasury.  Some accounts indicate that the flag was in President Lincoln's way, so he was holding it when he was shot.  Other accounts indicate that John Wilkes Booth tripped on this flag or another borrowed flag and broke his leg as he escaped.

After the confusion of President Lincoln's assassination died down, the flag was returned to the Treasury.  It was used in displays and ceremonies in the following decades before being sent to storage, where it was forgotten.  Years later a Treasury employee sent the flag to a Connecticut collector of Civil War relics.  It made its way to the Connecticut Historical Society where it was forgotten for a second time before being re-identified in 1998.

Even though it has undergone extensive restoration, it is very frail, so it is kept in the CHS temperature and humidity-controlled storage room if it is not on display.  An article with more information about the flag and its historic role is here.
Posted by Jack at 5:30 AM

When I travel in the USA it seems like everyone has a flag on their home. Americans are so patriotic. I'm glad this one has been saved.

After years of neglect, one would hope that they would find a way to preserve and display the flag.

An interesting historical artifact. I'm getting so old that I, too, need to be kept in "the CHS temperature [whatever that is] and humidity-controlled storage room."

But you knew that!

what a great piece of history! did you watch "killing lincoln" last night? it was pretty good but i fell asleep towards the end. will have to watch the ending tonight :)

A very interesting story. I imagine it must be hard to preserve fabric. Great shot.

Thanks for bringing this photo to us. We might not have seen it otherwise.

Thanks for that brief historical interlude.

Great shot and history, Jack! Like Lowell wrote, I need to be kept in the same controlled environment, so I do appreciate all that's done to maintain it. Thanks for the history info! Have a good week!

I'm always amazed at how pieces of history are placed into storage and forgotten. This is very interesting. Sounds like you have some clout, Jack, to find your way into he CHS's special storage area. Either that or the CHS Powers That Be recognized you from your profile pic and immediately ushered you in. Happy Presidents Day!

Wonderful history. It's is so good that it survives. Great post.

Wonderful that it has been saved!

If only it could talk Jack !

What a piece of history! It still gives me chills to walk by Ford's Theater, wonderful 'detective' work to track this down and tell its story in full.

That`s an amazing piece of history! Thanks for sharing.

At the moment I`m re-reading James Swanson`s book Manhunt, on the chase after Booth and Herold.

Amazing. I'm in awe of that flag and the fact that it was present for that pivotal moment..

After all this flag has been through maybe it should find a settled home and go under glass, it would be such a shame to lose something of such historical value, really interesting post Jack.

Interesting history about that flag! Too bad it was allowed to disintegrate as much as it has but kudos to those who are working to preserve it.

That is really something precious, I am glad to know they are taking good care of it!