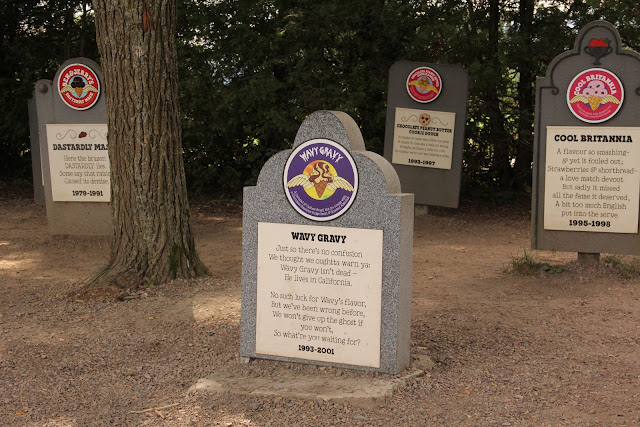 In late August I was in northern Vermont and visited the Ben and Jerry's factory.  Americans recognize Ben and Jerry's as one of the first mass market makers of fancy ice creams.  They have an offbeat, irreverent, hippy-style reputation, which is hilarious when you consider that they have been owned for a dozen years by the massive international conglomerate, Unilever.

Anyways, Ben and Jerry's has a graveyard for discontinued ice cream flavors.  Unless this post gets kicked out for violating their rules, it is posted to Taphophile Tragics, a meme about cemeteries.
Posted by Jack at 5:30 AM

No way - they discontinued wavy gravy?!

lol, very irreverent!
I like a lot the ice cream, different mix and tastes!
Léia

Hope that Cherry Garcia never makes it to their graveyard!

So funny Jack ... Wavy-Gravy discontinued and laid to rest .. what were Ben and Jerry thinking!

This is great....those crazy guys!

Graves for ice creams flavors?!! What a great idea!That's funny but clever, and a good reminder!

Oh no Jack, this is just 'dastardly' haha!

now i dont know whether i like this or not...
back in the netherlands i thought ben &jerrys was something very special (10 years ago or so), and certainly it was/is crazy expensive. here its cheaper and i dont really care for it anymore...

Some of their flavors have been very controversial- might be one reason for their retirement. I enjoy the humor- and the ice cream. Free Cone Day in April is very popular around here. Fun shot!

This is the first cemetery that ever gave me laugh.

Funny! After reading the flavor descriptions, I understand why they are dead. :)

I'm with Andy, this is definitely the first cemetery to ever make me burst out laughing!! Priceless! Hope your week is going well, Jack! Enjoy!

A funny idea and a nice occasion for an unusual picture!

I love this, Jack!

Cool Britannia how can it be too English. Some people have no taste. Nice touch that with the post.

Oh lol! I'm going to suggest that to the Paris shop!

What? chocolate peanut butter cookie dough is dead? I'm not sure I can go on

Seriously, I hope New York Super Fudge Chunk is not in this cemetery. I haven't had it for quite a while, but it would be nice to know that it is still available should I need a hit of its soothing qualities.

As long as there is not one for Chunky Monkey anytime soon I'll be a happy guy.

Jack, I just read your comment re. the difficulty of posting comments on my blog. No-one has told me this before so please let me know if this continues. My DH had some problems with our computer earlier this evening but there's no problem now. Pleas let me know how it functions in the future.

Ice cream is my péché mignon, and I reserve that indulgence for special occasions. I am not so sure about "wavy gravy"

Ha! I had no idea they did this .... and while I never really loved the Wavy Gravy flavor, it brings back memories of one of my roommates who could eat a pint of it in one sitting. So nice photo!

And it certainly does qualify for Taphophile Tragics, so thank you for sharing! :)

This is great, Jack. Back when I used to eat ice cream, I loved Cherry Garcia. So glad this was well received by Taphophile Tragics.

Funny. I hadn't heard about this cemetery. I knew they had sold out to a huge corporate enterprise awhile back, though. Darn!

An ice cream flavor graveyard? Only in America! Love it.