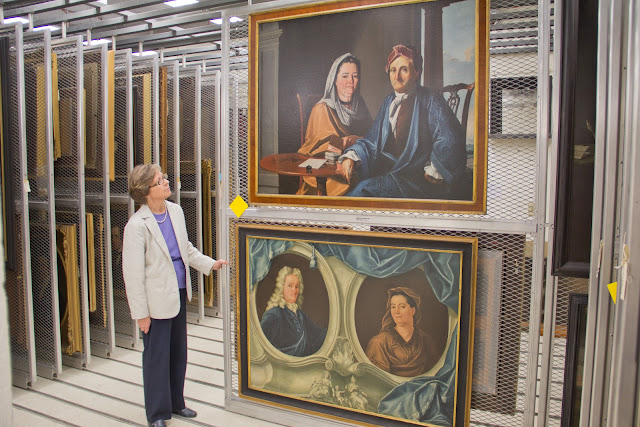 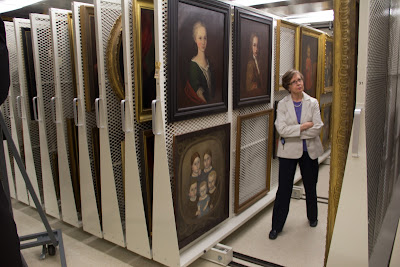 Elizabeth showed me the many paintings in the Connecticut Historical Society's collection that are stored while not on display.  The top photo shows two different paintings of Governor Jonathan Trumbull and his wife, Faith.  Trumbull was Connecticut's first governor.  He served from 1769 - 1784, beginning when Connecticut was a colony and ending when it was a state. 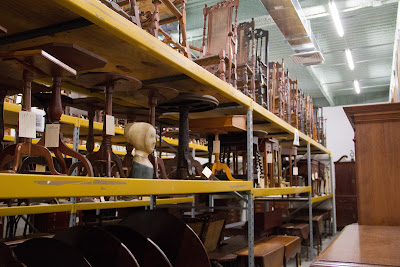 One of his sons -- John Trumbull -- became a leading American painter in the late 18th century.  He painted the top painting of his mother and father.  Another son -- Jonathan Trumbull, Jr. -- became Speaker of the United States House of Representatives, a U. S. Senator and eventually the Governor of Connecticut from 1797 until his death in 1809.

I guess this is how most artworks are displayed. It is the same situation at most museums.

Fascinating! I've never been inside storage facilities of the historically famous before!

Fantastic! Wonderful that you have all this access to behind the scenes. Photos are great.

What a privilege to be shown around the storage area!

It's so good to see that Connecticut is protecting and preserving its history ... wonderful painting by the son.

i've never seen paintings saved like that, neat! you had your own private tour!

Nice to know that the paintings are being looked after so well for future generations Jack.

Wow! You got quite a tour 'backstage'. Lucky you. Amazing what museums must provide in the area of storage.

I'd like to go backstage at the MIA, but I don't think that tours are readily available. Those portraits are such classics!

What a fabulous job. I love your reportage and photos, Jack.

This is a great tour you got. I'm amazed at all the works of art in storage.

How lucky to see this museum from a different angle! You must be a real VIP to get the backstage tour. Thanks for sharing with us. :)

PS: I'm ready to move back to the energy sector. I miss my transformers!!! :)

These are terrific shots and what a great tour indeed, Jack! Wonderful history and such fun as well!! Thanks for sharing it all with us! Next best thing to being there!!

You found a real treasure! I have just learned that John Trumbull is the author of the painting on the back of the quite rare two-dollar bills...

What a lucky guy you are to have had such a tour, Jack!

Museums are absolute treasure troves and only show so little...

The Trumbulls rule! I'd guess that the temp and humidity in this building is closely controlled and that they have plenty of backup generator power. Nice that you got close-up and personal with the interior.

Thanks for sharing the insider's view! Very interesting.

What wonderful access and enjoyed the Trumbull lesson. There's so much behind the scenes we never or rarely see - thank you for sharing!

What a grand tour you have had here! See what you can do when you carry your camera with confidence like a pro...

My favorite shot is the "ice-coffin" for the angle and the interest. Bravo!

Quite a collection of history... I haven't been to our WA State History museum in a long time... you're creating a hankering to do...

Love this 'behind-the-scenes' tour. Reminds me of a story I did during my news days at the St. Pete Museum of Fine Art showing where they store paintings during hurricanes and the priority list. Very interesting. If you've never been to that museum, it'd be a good day trip for you. Right in downtown St. Pete on the bay -- beautiful.

A lot of history there, and a part of a museum we'll rarely see.