The lead exhibition at the Wadsworth Atheneum currently shows French works from the museum's collections.  It will continue until January 27. 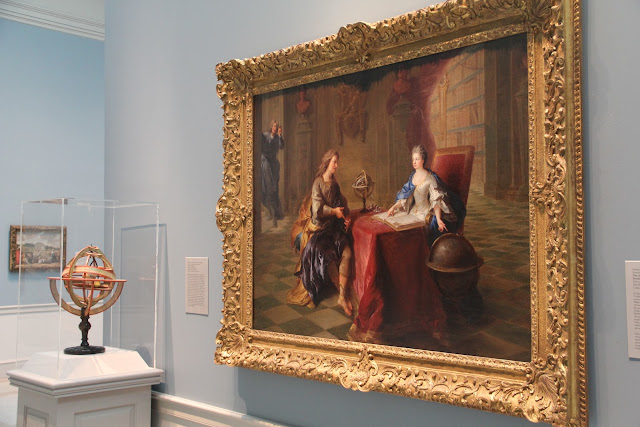 This painting is The Astronomy Lesson of the Duchesse du Maine, by François de Troy.  It was done in the period 1705 - 1710.  The Duc and Duchesse were favorites of King Louis XIV (the Duc was illegitimate and Louis was his father).  The Duchesse was interested in science, and is portrayed being lectured in astronomy.  The armillary sphere in the gallery is similar to the one shown in the painting. 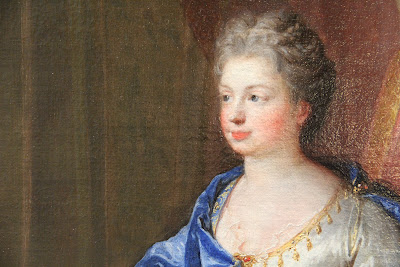 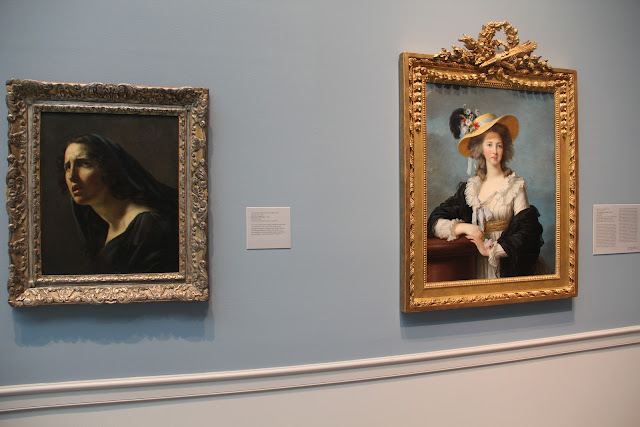 The painting on the right is The Duchesse du Polignac Wearing a Straw Hat, a 1782 painting by Élisabeth Louise Vigée Le Brun.  Vigée Le Brun was one of the foremost portrait painters of 18th century France.  Marie Antoinette was her most important supporter.  The Duchesse was considered one of the great beauties of the age.  She had humble origins but married a count, who was elevated to a dukedom.  The duchess became the governess of the royal children, a high honor and a lot of work!  Vigée Le Brun and the duchess both fled France when the monarchy fell.  The Atheneum's painting is a duplicate; the original is in Versailles.  (Hi, Cieldequimper.) 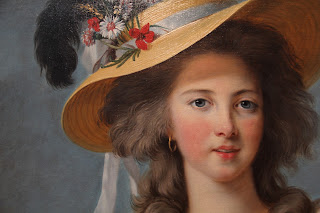 I would imagine these paintings effectively portrayed the way these people really looked so these are like photos in that sense and the painters might be thought of as the very first photo bloggers.

I haven't been to an art museum in years... you've inspired me to go again.

What artistry! The portraits are so realistic. Although I would not want to hang paintings like this in my home, I love looking at them in museums. It's amazing what the human mind and hand can create.

You've shown us some beautiful works of art with very interesting histories. Wonderful.

Isn't it funny to think we are a 'civilised' world today when really all this culture has been going on for hundreds of years and how lucky we are that it has survived for us to appreciate, thanks Jack.

Wonderful paintings, Jack, and fascinating histories indeed! Thanks for sharing the beauty -- something we all need to focus on these days!

Just beautiful! I especially like the Duchesse du Polignac detail at the bottom.

These are quite lovely, Jack. Like you have said about the blogs, they show one side of the world as it was but there was a whole other side that was struggling to survive.

These are very very beautiful !!

She was a great portraitist, you got a fancy and beautiful work of art here!

These are all stunning.

Hello and thank you. I love Vigée Le Brun. She was an excellent portraitist.

Beautiful works and a reminder of the eternal benefits of nepotism. But what's the portrait to the left of the duchess? That's the most interesting one.

The gallery looks lovely as well

I love art but these images would not be my first choice. I, however, appreciate the style and color; they're all quite lovely and remarkable.