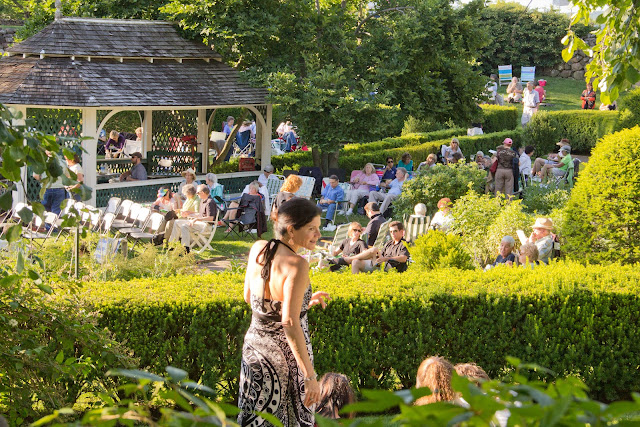 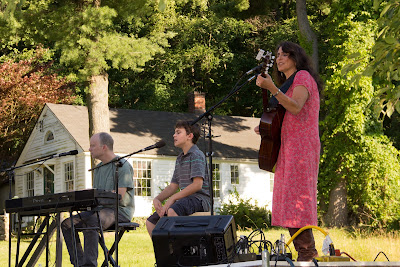 The sunken garden at the HillStead Museum in Farmington hosts a series of poetry readings on Wednesday summer nights.  Most events begin with a lecture, followed by music, finishing with a reading by a noted poet.  Last night the musicians were the husband and wife team of Liz Queler and Seth Farber, joined by their son.  They performed songs she wrote, inspired by works of the noted 20th century American poet Edna St. Vincent Millay.
Posted by Jack at 5:30 AM

What a wonderful sunny day for enjoying good music, poetry, chat with friends, cultural atmosphere at this beautiful garden. Your pictures are wonderful, the lady in your first composition is just adorable!
Léia

This sounds like a great event. A nice way to bring poetry to life. :)

I'm happy to see so much people listening and sharing poetry! Who said poetry was "out of fashion"?!..

What a nice way to spend a summer evening.

Oh, yes, indeed! A delightful way to spend a summer evening! I, too, love to see so many people enjoying/listening and sharing poetry and music! Looks like a really lovely place! Great shots, Jack, as always! Have a wonderful weekend!

Sounds like a wonderful way to spend a summer night. Like that first shot- it looks almost surreal..

That sounds like a perfect summer evening to me!

Arts and culture for the Hartford folk. Very nice. I like the inclusion of the woman in the first shot.

What a relaxing scene!

This does sound like an enjoyable event and looks to bring in a nice crowd!

Bet that was fun.

Nice. The top photo is somewhere between Renoir and Andrew Wyeth, and I mean that in the best possible way.

A beautiful spot for a gathering.

Listening to music in that delightful environment must be a real pleasure.

Now that's an event I would love to attend, as much for the setting as for the music and readings.