How Much Should a State Pay to Create a Job? 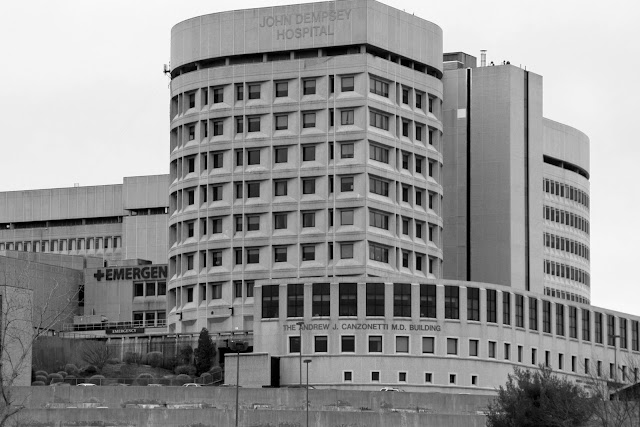 The State of Connecticut is going to give Jackson Laboratory $291 million to construct a genetics laboratory next to the University of Connecticut Health Center in Farmington (shown above).  As I understand it, the laboratory will do cancer research by studying mouse genetics.

The Governor of Connecticut brags that this will produce 850 construction jobs.  (You could create 850 construction jobs cheaper by hiring 425 workers to dig holes and 425 to fill them in.)  The State and Jackson project that it will produce 660 research-related jobs over 15 - 20 years.  (Yes, that was years, not months . . . how good are you predicting what will happen next week, much less what will happen in 2027 - 2032?)  Of those, 320 jobs are projected for the first ten years.  But, the $291 million the state is paying will be wasted paid up front.

Jackson says they will kick in $809 million to the total $1.1 billion cost of the project.  Jackson will get its share from federal grants (i.e., from us), philanthropy (i.e., rich and dumb us) and service income (I'll believe it when I see it).

I have houses in Connecticut and Southwest Florida.  Last year Florida told Jackson Laboratory to take a hike and I cheered.  This year they showed up in Connecticut but, unfortunately, the Governor bought the fairy tale story.

It doesn't sound much if you say it quickly Jack, 291 million pffft!! 567 million ehh!! Is that busway going to be sprinkled with diamonds!!

In all countries, we have same kind of stories, with same millions wasted, and same desperate citizens...

And don't get me started on cities giving millions of bucks to a sports franchise to get 'em to stay in town. That's called extortion anywhere else!

We are great experts in these things and they usually work like you said.

Sigh! Another example of how our duly elected officials handle our hard-earned bucks. Why do we keep these bozos in office??

I am so with you.

Those efforts do not "create" jobs, but merely relocated them from one state or locality to another. The cities of Phoenix and Scottsdale used to give back sales tax revenue to developers to induce them to build their shopping centers on either the Phoenix or the Scottsdale side of the border between the two cities in the rapidly developing and highly affluent North Scottsdale area. Subsidizing retail jobs in an upscale area where retailers would want to locate!

I read that the job creation practices of the State of Texas included taxpayer subsidies to relocate the US headquarters of CITGO to Houston. That's right. Taxpayer subsidy of an oil company which I understand is owned by Hugo Chavez's Venezuela government.

Sorry to get long-winded and political, but you touched a nerve with your commentary today.

We do indeed hear the same stories from everywhere these days! Makes you wonder where all these idiots come from and how do they get into office??? Guess it doesn't say much for the voters either. Hope you have a good day anyway, Jack!

This photo blog is turning into a politics blog...

They never actually ask us how we want them to spend our money do they? OK, we can vote - but by then they've gone and spent it!

Jack, it seems appropriate to me, considering your post and the facts/tone of that post, that my little ol' Imac and the Internet have been working and working and working to load you photo. Perhaps it is a technological statement in support of your post and the waste, ineptitude, and wrong-ness of this decision. I now send my comment to you. Let's see if it goes since the image still has not loaded.

I agree, they never ask!

You pose a tough question here. Let's hope some good comes out of all the money at least!

I'm sorry to say the same sillyness goes on in Canada too.

It seems to be the same the world over!

This reminds me of our previous government which was about to spend millions in similar stories right when we started being hit by the economic crisis and the bailout had to happen. Can you believe it?

{groan} I think it's always been this way. How much [indirectly] do you think the governor will enrich himself through this, also? I suspect these boondoggles weren't as painful when economic times were better and people didn't feel the tradeoffs so acutely. Or, maybe I've just seen a few too many now. I didn't turn into a cynic completely of my own accord.

All sounds depressingly familiar< Jack. We even have a busway that went WAY over budget. When I was forty I began to realise that politicians and experts were not much smarter than me, now I know they're not even that smart.

We all have the same thing going on in our states. But what about the economy with all that money that went to create all those jobs 3 years ago.

Lowell and I seem to agree on the sports teams. Don't get me wrong I love sports but the salaries make me nuts. That's alot of money for mouse research.

I'm sure the hospital could use some money...

Could be worse, do you know how much is thrown at the olympics, always sold as being good for the city but always makes huge losses.

I was pessimistic until you told us Florida rejected it. That's the surest way to gauge the value of public investment: Whatever Florida does, do exactly the opposite.

I'd love to see CT get some of Florida's high speed rail money to link JFK/LGA to BDL.

Dan comments above that this photo blog is turning into a politics blog. I have posted 560+ posts so far, and if I really stretch, I can think of maybe three (including this one) that could arguably be considered political. I think of this one as addressing an important Connecticut fiscal policy issue, not politics. If three out of 560 is too much, I'm not apologizing.

Ah, yes....Jackson Lab! They were eyeballing Sarasota. Many local Powers That Be were very eager to roll out the red carpet for Jackson. Glad that's in the rearview mirror. Hope it works out for CT. But, honestly, 15-20 years?! Jeesh. By the way, I for one do not feel HDP is becoming political. Keep up the good work, Jack!