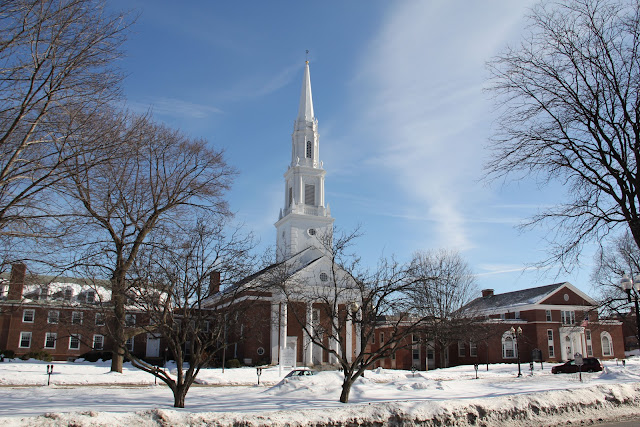 You saw First Church of Christ Congregational reflected in a bank window earlier this month.  I think it deserves its own post.

The church is in the middle and left of this photograph; the West Hartford town library is the brick building to its right.  From the 1940s through the 1980s, this was one of the most successful Protestant churches in New England, with a huge congregation.  In the last two decades, rifts developed within the congregation and some of the senior ministers turned over in just a couple of years, so the congregation today is a bit smaller.  It is working to regenerate itself.
Posted by Jack at 6:01 AM

This looks like a scene suitable for Currier and Ives.

Fantastic postcard!
This Church is beautiful and your picture just perfect!
Léia

What a magnificent steeple against the blue sky. A really nice shot with the snow and bare trees.
☼ Sunny

You live in a picturesque and historical area!

Love this image in the snow.

Jack, glad that you filled in the reflection for us... Beautiful setting and church. I am pulling for their "regeneration."

It wouldn't be a church if it didn't have rifts!

Gorgeous building, but best of all, your photograph does it justice. Superb work, Jack!

I posted a church on The Villages today, but it ain't nothing like this one!

Thanx for the info on the bike ride...it is sounding better and better. Heck, I could probably do something like that. Hopefully, you'll have something to carry your cameras in and not have to hang them around your neck. :-)

I love the steeple! It sounds like this church is going through what a lot of Episcopal churches have been experiencing the past few years.

Dear Mr. Jack: Re your question on Images ... what you are seeing at the end of the tunnel is the green and surrounding area of the 9th hole of the Stone Creek golf course. The big stone wall in the background is where we lock up recalcitrant and slow golfers!

It's a beautiful church Jack, and beautiful photo (even with the snow!!!)

A beautiful small Church in the middle of a delightful village in winter.

I agree, pretty enough for a postcard! Looks like a couple bucks went into making that place.

This beautiful, brick colonial church very much reminds me of our own Gloria Dei Lutheran Church in St. Paul, MN!

It certaintly does deserve its own post. I love that classic church style.

Well, I made here by way of Explorer, a bit of a bumpy ride, as it does not seem to like my computer, but a lot shorter distance than actually driving to Hartford to see it. ;-)

Great shot and a beautiful church! Not sure why, but it looks very American to me. Maybe EG has it right - it looks very New England.

The snow adds that perfect touch!

Gorgeous photos, Jack! I might have to take a weekend trip up to Hartford...in the spring, of course!

A beautiful church. Architecturally speaking I see how approprate is the term New England!

A classic New England capture. Perhaps with all the changes at the church, the snow and barren branches are appropo.