Bicycles Made in Hartford 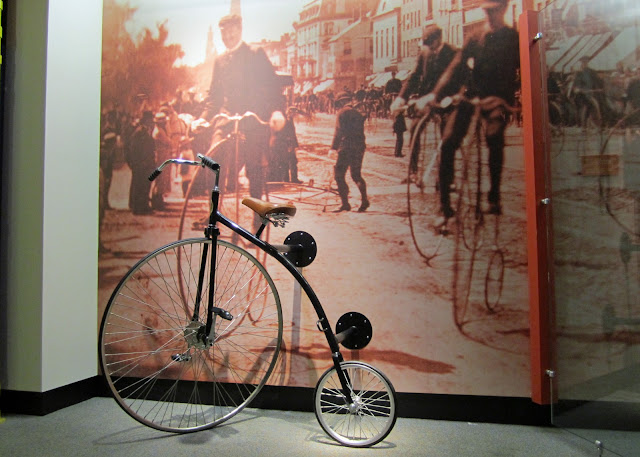 Hartford was instrumental in the founding of an American bicycle manufacturing industry.
Col. Albert A. Pope was a Boston industrialist who became obsessed with bicycles in the late 1870s.  He started a bicycle importing business and soon decided to build them himself.  Because Hartford had an abundant supply of skilled metal workers, he opened his first factory here.  Pope's bicycles were sold under the Columbia brand.
I attended a lecture at the Connecticut Historical Society in the autumn about the rise and fall of the bicycle-building industry in Connecticut. It fascinates me how people become expert in very narrow fields. If you are a bike history nut, who do you talk to about it?
Posted by Jack at 7:07 AM

I love the look of those old fashioned bicycles with that one oversized big tire and that itty bitty one. Think of all the potential bike history nuts that lecturer created!

I am with Sharon, I wonder whether it was easy or difficult to ride one of these types of bicycles.

SO very interesting! I have a thing for the bicycle, and have been watching videos and documentaries on the exact thin. I was also wondering about the fields of study and how one can get absorbed into such a narrow one such as "the bicycle". Interesting how something can stand out to us and capture our attention.
A bucket list goal (or dream) of mine is to ride on of these through the streets of the nearest town:)

I'm not a history buff re. bicycles, but bikes always interest me...especially unusual kinds. Love the one you photographed and would love to ride one!

Great shot and interesting topic... history of bicycles. Before the internet, the path to discovery would entail much research and knocking on doors... I imagine that this history was quite interesting and I wondered what is the current status in CT for the industry.

An interesting post! I have always wanted to try riding one of those old bicycles. Right now I'm just trying to teach my grandson how to ride the one he got for Christmas.

This is funny. My husband and I were just talking about old-fashioned bikes the other day! Apparently they had to make one wheel big and the other small so there would be enough ooomph (or whatever the technical term is) to keep the thing rolling. When bikes started having cogs and chains, different sized wheels were no longer necessary. But I guess you knew all that already! :)

Must be difficult to ride, but looks lovely!

I'll bet balance played a bigger part with these bikes more so than the ones of today. Did you take a spin?

I'd like to see you on that one! Interesting history.

Great post! That bike looks to be in mint condition - never been dropped.

Always thought these early bikes were so strange looking. Thanks for the brief history.

Hahaha, I can't say I'm a bicycle history nut, but it is fascinating. I had no clue Hartford played such a big role. Those particular bikes always seem to defy physics to me.

I love to take pictures of bikes, this one is fascinating, very interesting place!
Léia

I'll pass on trying to ride this thing but I'd like to see one at work...

Seriously, I do remember the Columbia brand from my youth - way back when.

Re your comment on Images...Nope, doesn't count as a CDP blog. I've got enough of those anyway!

Have a great day. Are you going biking?

I really like your last question!It makes me remember of a story, where a man was the only one left to speak his language on earth and did not know any other one..