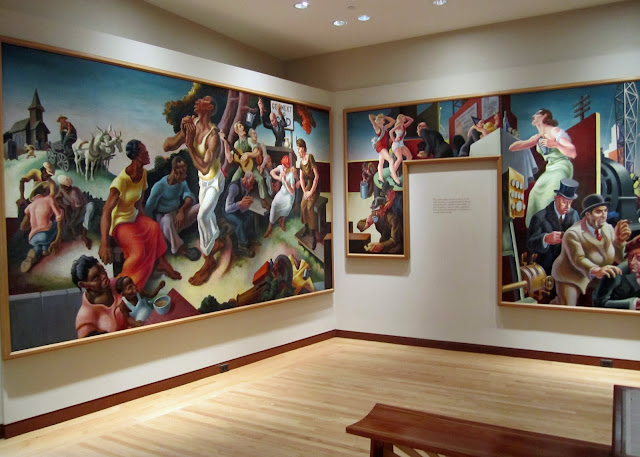 Thomas Hart Benson painted these fascinating murals in 1932, in the middle of the Depression.  The Arts of the South is at left and part of the Arts of the City is at the right. The entire work comprises five murals filling an entire room at the New Britain Museum of American Art, which is 15 minutes west of Hartford.  The murals were purchased in 1953 from the Whitney Museum in New York, which had commissioned them to fit a room in that museum.

Benson came from a political family.  His uncle of the same name was a U. S. Senator from Missouri.  The artist affiliated with left-wing politics and alienated many in the Establishment arts community with his out-of-fashion realistic style and his abrasive personality.  Today Benton is identified as the leader of the school of art called Regionalism.
Posted by Jack at 7:01 AM

Beautiful pieces! They seem to light up the room.

I like these, Jack. They are so full of emotion.

Benson really must of having been off the charts to the left if he was alienated by the arts community. Not my style of art, but thought provoking nontheless.

There is so much detail in his work, a lot to take in.
☼ Sunny

I love his work. I first saw one of his painting at the Phoenix Art museum. Nice shot.

Funny, I knew immediately upon seeing this work that it was done in the 30's-- that era is so distinctive. I love it.

Impressive collection - they are beautiful!

Wonderful paintings in a beautiful style! The artist on my blog today does quite differently styled art!
Regards to a fellow "culture vulture"

Very interesting. Not my cup of tea though, this style reminds me of the same period in European countries ruled by dictators.
It does tell a story though, well several stories actually and does it well.

I fell in love with Thomas Hart Bensen in the Nelson-Adkins Museum (?) in Kansas City... just amazing in color and dimension... I did not realize that you had some of these in your area.

I love them! It must be fabulous to see the whole mural. Super colours and great style.

We have the Thomas Hart Benton home here in Kansas City. It has been on my list of places to visit and after seeing these murals, I plan to move it up on my list.

Beautiful work with such detail and movement.

Nice murals. I particularly like the Arts of the City. I am fascinated by that period (depression and the years preceding). Great works, both of them. I'll have to look him up.

I am envious of those with the ability to paint like that and to create art. So much detail in that! Thanks for sharing that with us, I'd never heard of him before.

Thanks for stopping by, Jack. I appreciate it very much.

Very strong paintings!They remind me the work of Diego Rivera. One more proof that in political action, a picture is stronger than thousends of words..

It has something of the Socialist realism in Soviet Union, but with more life and some real expression. I still prefer this over most of our senseless contemporary art.

What a superb gallery I love the light in the room so often galleries are too dark.

These are gorgeous! Diego Rivera just came to my mind.

Benton along with Grant Wood are my favorite Regionalists. When I was a kid I had an Encyclopedia Britannica Junior that was illustrated with the Regionalists' lithos and woodcuts. Guess that's where I got my interest in them. I would travel to Hartford just to see these murals. Lucky you, that they live in your town.

Note: The painter's last name is spelled "Benton" with a "t".