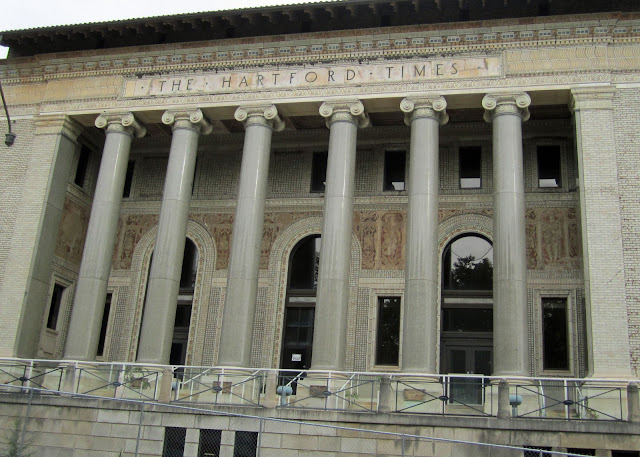 The Hartford Times was a newspaper that ceased publication 35 years ago. It was published in a classical building in downtown Hartford. Only the facade remains.

The building is in an area that has been undergoing major redevelopment with a lot of funding from the State of Connecticut. At one point the local art museum -- the Wadsworth Atheneum -- was going to take the building over and make an administrative office out of it in order to free up more exhibition space in its main building across the street.

But, that deal fell through and the economic downturn has put other possibilities on the shelf. Until the economic environment resumes, the shell of the Hartford Times building stands as an abandoned hulk.

I am out of town this week, so I don't have new snow photos from the big storm.
Posted by Jack at 7:49 AM

A beautiful place. Shame it doesn't have a purpose.

The grand facade and its current status as an empty shell symbolizes what has happened to the newspaper industry. Sad.

Glad that you are missing the record snow that Hartford is getting... I was thinking about you and had to hop over here to see how you are doing... out of town? perfect!

It's a grand building so I hope it gets a new tenant soon.

I love Greek Revival architecture. This is a gorgeous example. I hope it gets a fitting new tenant (and a careful makeover).

I don't think you're missing much with the snow. Everyone is posting snow updates (guilty). It's nice to have a non snow related blog in New England this week.

I hope hope hope that whoever does whatever with this beauty keeps the façade.

Excellent post. I sure hope they find a use for that beautiful building

I sure hope someone takes this project on! I think North Americans are too prone to abandoning our treasures.

That's a shame! Reminds me of some of the grand old buildings of the Minneapolis of my youth...

I have a feeling you're enjoying your "out of town" time!

That really is classic.

This building with the classical feel looks like it deserves to be preserved. The elegant facade can lead in the redevelopment of the neighborhood.

I hope they will be able to preserve this majestic building. I see it more like a museum that some kind of office building, but I don't know the inside...

What a fantastic Greek temple of a building! I sure HOPE they can use it for something! A hotel? A library? A school?

I too hope they can preserve this - it's too elegant to waste.