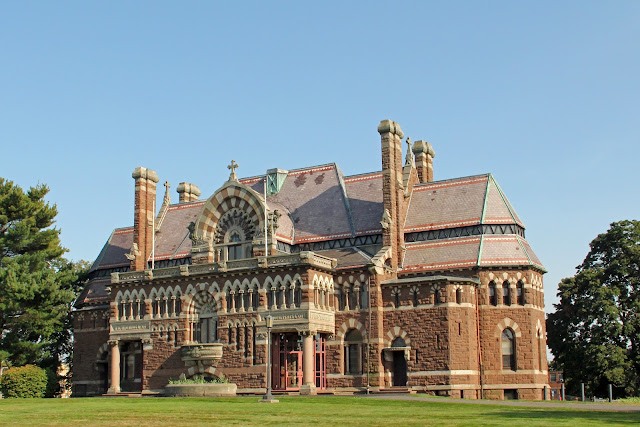 The Colts' only son surviving into adulthood was Caldwell Hart Colt.  He was an ardent sailor, who died in a boating accident in his 30s.  To memorialize her son, Mrs. Colt had an impressive parish house built to accompany the nearby Church of the Good Shepherd, shown yesterday.

The bottom photo is from the turn of the 20th century.  The top photograph is from September.  The central tower and the ironwork along the ridgeline have been removed. 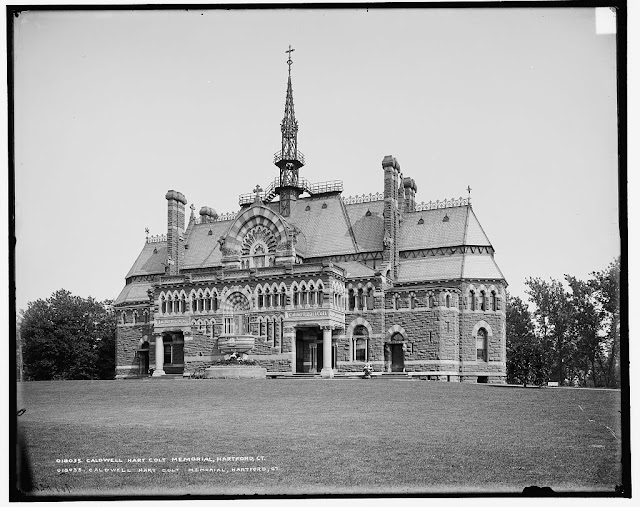 That's quite a house! I went back to yesterday's photo and felt that some of the comments using the word "shot" was somewhat ironic, given the owners of the property. I've been paying attention...our conversations are rife with phrase connected to violence.

I think it looks better with the ironwork removed but I admit I'm not a lace lover, preferring less fancy looks. How sad that the Colt's only son died so young.

Mrs Colt was famous and rich but was a poor lady , as she lost everyone she loved..Luckily, she had means to keep memories in a beautyful way!

I wonder why they removed the central tower ... It added height and character to the building. I agree with Malyss rich and famous but I'm sure Mrs Colt would much rather have had her son alive and well.

Kate is right about the many expressions that derive from guns I have tried to stop using them. It is not easy.

This is a very beautiful and impressive building.

It's always so interesting to see now and then images Jack, I think I agree with EG, it looks better without the 'fancy trimmings'
P.s. believe me when I say I don't get up that early very often!!

I agree with EG and Grace, I too, think the house looks better without the ironwork. And it is sad they only had the one son and lost him so early. It's easy to forget sometimes just how fortunate you have been. Great captures for the day, Jack, as always.

Impressive building. Interesting that the tower has been removed. I too like it better now.

How strange that they were taken off. It's a lovely building and the missus certainly knew how to honor her family...

I like the tower removed but rather like the ironwork along the ridgeline - and that from an ardent modernist minimalist!

My first reaction to the ironwork is that it was probably an excellent lightening rod, which may have been its demise.

Very impressive. I prefer the way it is now.

Wow, that looks like a castle... the Winchester family was a sad story as well...

Wow, that's an Edwardian dream or nightmare. Can't decide which.

I'm not quite sure how to react. It's impressive (so's the church) but it's also the first time I've seen this architectural style – I think I have to get used to it first.

Not much of a difference between both the pictures.
Wonder why they removed the central tower.

It's a fantastic building! What great architecture.

Great building, but, why was the central tower removed?

Quite an impressive place!

Hi folks- I'm the Senior Warden (head lay person) at the Church of the Good Shepherd, which includes the Caldwell Colt Memorial Parish House. What I hear is that the tower was meant to mimic the mast of a ship. Owing to Caldwell's nautical lifestyle, the building is loaded with such images that reflect his interests. The story is that the tower and cresting were removed to be recycled into armaments (perhaps WWI). Similar cresting was removed from the church I assume at the same time. Many church records were lost during the flood of 1938 which totally engulfed the church. The buildings were designed by Edward Tuckerman Potter who also designed the Mark Twain House in Hartford. Both he and Mrs. Colt had their eccentricities.

.....incidentally, the building is called a parish house but is not actually a house. It is really more like a community center. The second floor is a ballroom and the main floor included a library, kitchen and gathering spaces. The basement focused on recreation and once contained a bowling alley.