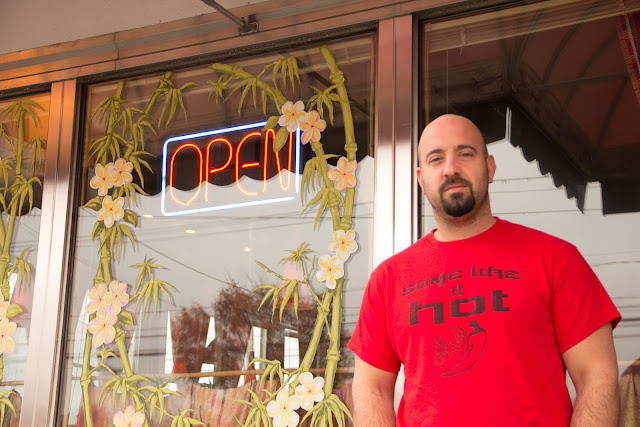 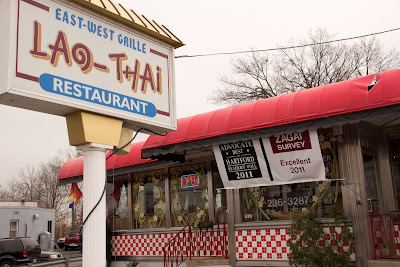 Some people get very suspicious when they see you taking pictures of their restaurant.

I was driving down New Park Avenue, the street that divides Hartford and West Hartford in the southern part of town.  I saw banners saying that the restaurant in an old diner had won some awards from Zagat and a local newspaper's reader poll.  So, of course, I stopped with my camera.

A rather hostile chef stared from the front door and asked what I was doing.  I don't think he believed me about a daily photo blog, but he warmed up and posed for a photo.  Then, he invited me inside, showed me the menu and told me to come back for lunch some day.  I will.
Posted by Jack at 5:30 AM

Of course he believed you. Remember to bring the camera for your free lunch!

I got the same reaction in Whole Foods in Santa Fe. Someone told me that often businesses are wary because they are concerned about competitors taking photos. Seems a little paranoid to me. Glad Mr. Chef warmed to you. He doesn't look too menacing!

I had business cards made and carry them with me so if I get that reaction, I give them a card and invite them to visit the blog. The chef looks like he could be kind of scary!

I will go with you and try the restaurant!

I wonder why this suspicion! You'll have to tell us how it was!

Pass! I'm into the mild.
Quite a sensitive guy, you know.

You charmed him Jack! I wouldn't mind his tee shirt, I like it hot!

Ah, what a suspicious world we live in!! I, too, have business cards, but then I'm usually taking photos of skies and they don't mind at all!! In fact, they really show off for me!! I always enjoy your posts of people and/or places and this does Look like an interesting place to eat! Hope you have a great weekend, Jack!!

Oh yes, you will have to tell us what you think. I love Thai food and I'd surely want to try this place.

You ALMOST got a smile Jack. Good for you! Yeah, they get suspicious cause they think you're from the Health Dept. or something! :)
V

The other day I was taking a shot of a house, the owner came and we had an argument. He was so arrogant that I got really furious. I ended up talking louder than him and I took more shots of the house just to make him angry! LOL!
Great title, btw.

Sometimes people are like that, I'm glad he warmed up to you though! I would definitely come to this resto as I am one of those who like it hot. ;)

I'm sure that next time, you'll be welcomed with a beautyful smile! Who could resist to your charm?!

A great looking place. A card would be a good idea!

Some people are strange, aren't they? I hope you'll tell us if the food is good there:)

You would think he would want any attention to his restaurant that he could get. :) It is strange, isn't it, when we tell people we are taking pictures for a blog. I've gotten all kinds of different reactions, but usually people just strike a pose and wait for me to take a picture.

I wonder why business people get so upset? You'd think they'd like the publicity. I can more understand if it was someone's house you were photographing. Where I live, I would say if you don't want to get photographed don't live in a World Heritage Site!

Totally looks like my kind of place. I think you need to eat there and do a review....complete with photos.

Interesting the reactions of people to photographers... he looks like he could whup some a##... glad he warmed up to you!

Same thing has happened to me. I've been thinking of getting some business cards.

watch out, he is a big guy! LOL
Léia

I always try, but sometimes it is hard, even impossible...

Way to win him over, Jack! Ooh, the stories I could tell you from my previous career about angry, suspicious people.

Jack - This is a terrific restaurant. I'm surprised you haven't been there yet. Definitely check it out. Janet