Out of the Jurisdiction: Kinderdijk 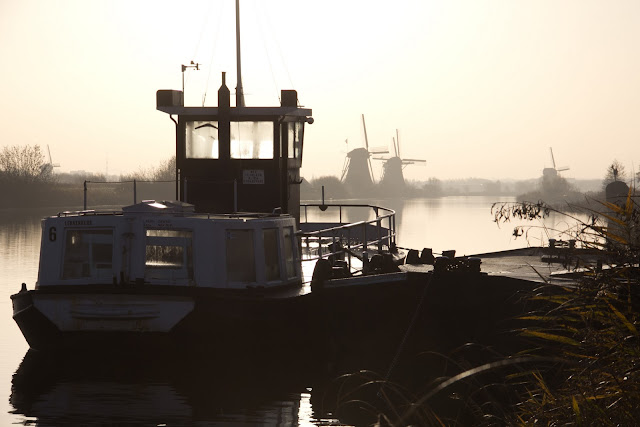 Nineteen windmills at Kinderdijk ("Children's Dike") comprise a Unesco World Heritage Site.  The Netherlands would have returned to the sea without the invention of windmills to pump water from the developed areas, up to the rivers and on to the sea.  These days, steam and diesel machines do the work, but the windmills remain.

I return late today.  New photos from Hartford should begin on Tuesday, though I will no doubt sprinkle in occasional photos from the trip.

Wonderful composition! Love the mills in the background!
Thanks for sharing, Jack;o)

this is simply gorgeous. i would love to see more from this journey you've taken.

Continue the sprinkle, esp. if you post this kind of photo...splendid!

Terrific capture and wonderful composition, Jack! I love the windmills! Hope you're enjoying your trip!

The windmills on the horizon have the quality of a Dutch landscape painting.

I never knew that the windmills were for the purpose of water management.

A very iconic shot of this area. I am enjoying pics from the trip!

Beautiful photo! I love the misty look and the silhouettes of the windmills.

What a lovely shot, Jack!

A picture that says everything about Holland!a real beauty, you were inspired!

It looks so romantic! Wonderful.

Extremely well captured Jack. The windmills in the mist lead me to think this was a morning shot.

What an amazing scene.

nice journey, it is amazing what humans will do! very nice photo, safe journey home.

Now this would have been a place for Vermeer.

I'm back too from Germany, I wonder when I'll have time to go out shoot new stuff!

Such a fabulous shot Jack, the composition is magic!!

Lovely image from a lovely place.

That would be a sight to behold...