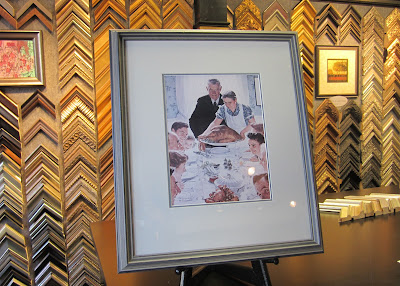 Norman Rockwell gained his reputation as illustrator of many covers for the Saturday Evening Post.  During World War II he produced many paintings that were distributed as prints supporting the war effort.  His Four Freedoms series was among his most famous; millions of prints were distributed.  This is Freedom from Want, from 1943.  The others were Freedom of Speech, Freedom of Religion and Freedom from Fear.

Frame Dimensions in West Hartford Center let me move this print into a spot where I wanted it.  I have had things framed there for years.

I hope everyone has a great Thanksgiving today with family and friends.
Posted by Jack at 7:34 AM

Wouldn't be Thanksgiving without seeing this photo!

Happy Thanksgiving from one member of the American CDP community to another!

Norman Rockwell... great choice for a unique photo. This painting is an American Icon (and Rockwell, a great New England product). Thanks for sharing.

What a perfect way to reflect on this day! I once went to Washington DC (while I was working in Chicago) specifically to see a Norman Rockwell exhibit. Besides being a great talent, he was a very wise man. Have a wonderful Thanksgiving!

A classic cover of that magazine.

Perfect for the day. Have a happy one!

Even I know that cover, and I live a bit faraway...
Have a great Thanksgiving!

A very famous painting. I've loved Norman Rockwell's work since I was a small boy! Nice shot. Hope you're enjoying your turkey day!