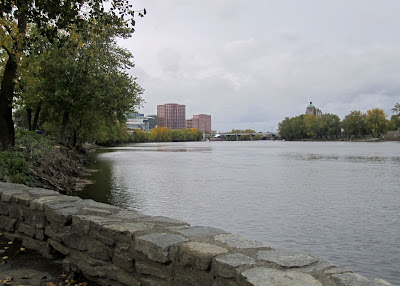 It seems odd that I have posted more than 125 entries without yet having posted a photograph of the Connecticut River.  So, here it is.

The Connecticut River starts way up north in New Hampshire, just a few miles from Canada. For the first half of its 400 mile total distance, the river forms the border between Vermont and New Hampshire.  It then bisects Massachusetts and passes Springfield before running south into Connecticut.  North of Hartford, the river is non-navigable and is spanned by a series of locks and dams, most of which are in Massachusetts or New Hampshire.  South of Hartford the Connecticut River widens and flows slowly in a southeasterly direction until it pours into the Long Island Sound at Old Saybrook.
Posted by Jack at 7:53 AM

That's quite a trip.

Beautiful photo and wonderful description. That rock wall reminds me of the walls I used to see along the Mississippi River in Illinois where I grew up.

Nice post and what nice looking river. I can only imagine the things you would see walking along it's banks.

I hate to say it, but I've never really been up "east" except to New York. I think I need to change that. Hartford looks like a really nice city. And I like that you have a river right there.

Good God, I never even thought there might be a river. Blushing.

It really is a great asset. Great photo.

Very lovely image - especially with the old rock wall. Something nice about the timeless irrepressible movement of rivers. They'll be around long after we're gone!

I'd like to walk along the banks of this river, camera at hand.