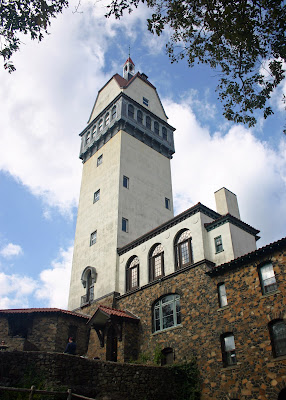 Heublein was an alcoholic beverage company in greater Hartford. The Heublein family built this tower atop Avon Mountain, a ridge that divides the Connecticut River Valley from the Farmington River Valley to the west.
There is a short 40-minute hike up to the tower.  The first part is steep, then the path flattens before a final uphill climb to the top.  From the tower the 360 degree views are spectacular.
Sunday was Tower Toot, an annual festival at the Heublein Tower.  The trails were crowded.  There might have been more people climbing the trails than at the football game I featured yesterday.
Posted by Jack at 7:33 AM

The framing on this is perfect. Sounds like a fun festival and a nice way to spend the afternoon.

It's good to hear so many people chose to exercise themselves rather than watch other people exercise for them. Beautiful photo!

Okay...you have done a great job photographing this tower. But now that you've troubled to inform us of the great 360 degree views it would seem appropriate for you to hie thyself to the top and provide some photographic evidence of the 360 degree beauty.

By the way, unbeknownst to me, Felix's closed some months ago...when I took the picture, it sure looked open; still tables on the porch, etc. Some think the closing will be Ocala's loss.

Ah. A German name and a German looking tower that I like a lot.

Awesome shot of the tower. I just Googled it and I'd love to hike up and see the views if I'm ever in that area.