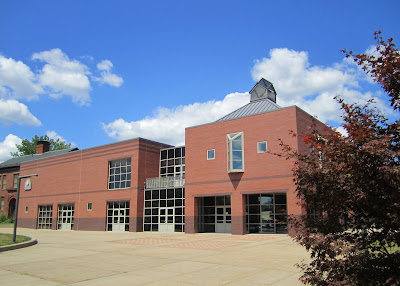 The Artists Collective is a multi-cultural organization in Hartford's North End.  It was founded by the noted alto saxophonist Jackie McLean and his wife Dollie.  Jackie played with jazz greats like Charlie Mingus, Miles Davis and Art Blakey.  Later, he became a faculty member at the University of Hartford's Hartt School.

The Artists Collective began in 1970 and has earned numerous awards for the arts programs it offers to minority children.

About a decade ago, the Artists Collective opened this new facility, designed by the Hartford-based architect Tai Soo Kim.
Posted by Jack at 7:07 AM

It looks rather like a school. Glad to see that art and creativity are valued in your community!