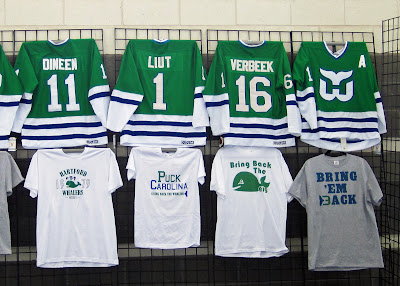 Last month I posted about an effort to drum up fan support for a return of major league professional hockey to Hartford.  We had a team -- the Hartford Whalers -- until the team's new owners moved them to North Carolina in 1997.

Yesterday the first step toward that goal was announced. The Whalers' original owner reached agreement with the New York Rangers to manage the Rangers' Hartford-based minor league hockey team.  And . . . they will bring back the name in part, in the form of the "Connecticut Whale."  If they develop a big enough fan base, in a few years an attempt will be made to secure a major league NHL franchise.

I can hear Brass Bonanza playing already.
Posted by Jack at 7:43 AM

Hope it all works out!

Glad you enjoyed the red tail lights! I agree with your reminder.

That would be great to have a new Whalers team in town. Sounds and looks better than Wolf Pack I say.