Out of the Jurisdiction: Johnny Clegg

We went to a Johnny Clegg concert.  Clegg is a longtime revered South African songwriter and musician whose music is based on Zulu and Celtic influences.  His early bands featured
white and black musicians singing songs with coded anti-apartheid messages.
Clegg's performances often feature his energetic foot-stomping Zulu-based dances. 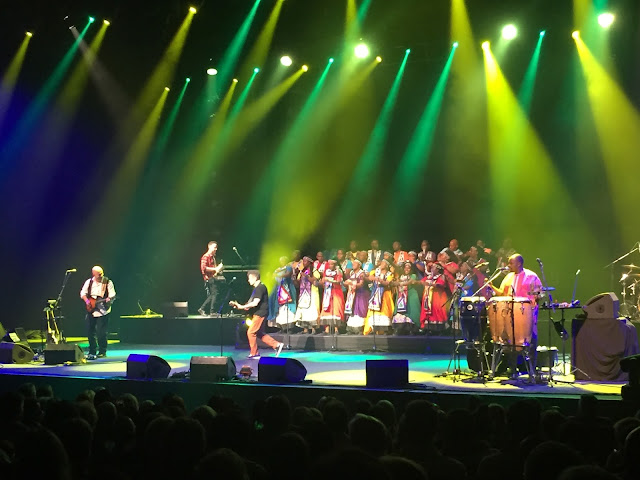 In the song shown above, Clegg is backed by the award-winning Soweto Gospel Choir.
One of Clegg's best known songs is Asimbonanga, a 1987 protest song dedicated to Nelson Mandela,
who came onstage and danced to it in 1999 when he was South African President.  After Mandela's death in 2013, Clegg re-recorded it.  Today is Nelson Mandela Day in South Africa.
Posted by Jack at 5:30 AM

Thanks for the link, Jack! Loved the music and the faces of all those beautiful children. Musical performances in SA are outstanding, and, oh, how I wish I had been there. Photos are terrific and capture the atmosphere.

Looks like a great performance. I liked listening to the video, never heard it before.

Blimey, thinks I, Johnny Clegg? Is he still around? However old is he these days? It turns out that he's just four days older than I am!

Oh wow, this must have been colorful and energizing!

That must have been a pleasure to see!

i bet that was fun! looks so colorful!

Looks great, Jack! I'm off to check out your link.

Zulu and Celtic? That's new to me. It looks and sounds like a fabulous performance.