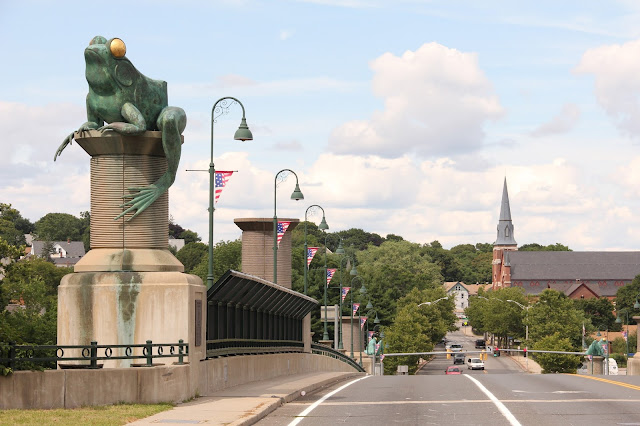 What do you do when the monthly theme for City Daily Photo bloggers is "street lamps" and the local streetlights are pretty boring?  They are energy efficient and they light wide areas well, so they do their job.  But, most Hartford streetlights are bland and inconspicuous.

So, I went half an hour east to Willimantic.  Close enough.  The Thread City bridge celebrates both the city's heritage as a textile manufacturer and the 1754 War of the Frogs.   One night in June 1754, there were loud noises, and the citizens thought they were under attack.  So the men took their muskets and fired into the pond where the noises originated.  The next morning the citizens found hundreds of dead and dying frogs, which had been fighting for their lives as a drought was drying up the pond where they lived.

The bridge's four corner columns are topped with huge frogs atop spools of thread.  And the streetlights on the bridge are more interesting than most Hartford-area streetlights.

Click here to see other interpretations of the "street lamps" theme.
Posted by Jack at 5:30 AM

Has anyone ever kissed that frog to see if it would turn into a prince? Just askin'.

HAhaha! That's a fantastic story!!! And I SO admire your dedication!!

Now, that's quite a story to pass along. Much better than lamps too.

Great legend and wonderful composition of the scene for theme day.

Your dedication to drive to find a better street light is admirable.

I could not find the August Theme Day page until I found your link. Thank you for you superior skills in that regard.

amazing! that frog!!!
and wow, its august already?! totally forgot....

Wowsers! Never, ever would have expected this, Jack! Thanks!

Great photo, Jack. Love that frog! And what a funny story! I laughed out loud.

What a great story Jack..poor wee froggies :) they got their revenge by coming back really big haha! Love the little bit of delicate fretwork on these lights going over the bridge.

Oh, a great story indeed, Jack! I love the frogs -- and the spool of thread! Great photo and what a fun start for my day!! Enjoy yours!!

What a fantastic story. The street lamps are great but, that frog is simply wonderful. Poor frogs, I'm glad they have been remembered with these monuments.

You tell us a nice and incredible story today, Jack.
Love the great frog!

Lol @ EG! Now why frogs though?

Smashing story, Jack. Super photo too!!! Good on you to take the theme day to heart and travel a little.

So glad that the War of the Frogs isn't going to be lost in the mists of history...

Great story and a wonderful post. Well done! I couldn't muster enthusiasm for the theme and the lamps I found were evidence of that.

Only in Connecticut! I'll have to drive up to have a look.

Jack, that is a great bridge and story about the frogs. The wilderness can be a scary place if one doesn't know what fighting frogs sounds like. Is the H.S. mascot "The Fighting Frogs?"

Oh! those poor frogs ... at least they now have pride of place atop that elegant bridge with it's pretty lamps. Well worth the trip Jack.

Quite a story, and quite a location for a pic!

Great photo, Jack. I like your composition much better than mine when I photographed this bridge last December. It is an interesting bridge, and town.

Moral of the story: either a stitch in time saves nine or don't shoot until you see the yellow of their eyes.

There are really cool.

Certainly unique - what an interesting story!

The frog is just fabulous! And what a story, Jack! :-)