The Manchester Road Race is a five mile race run every Thanksgiving morning.  Thursday's race was the 76th annual race.  It attracts world class runners as well as families, casual runners, and folks just out for a good time.  Amby Burfoot won the race nine times between 1968 and 1977, and ran yesterday for the 50th time at age 66. 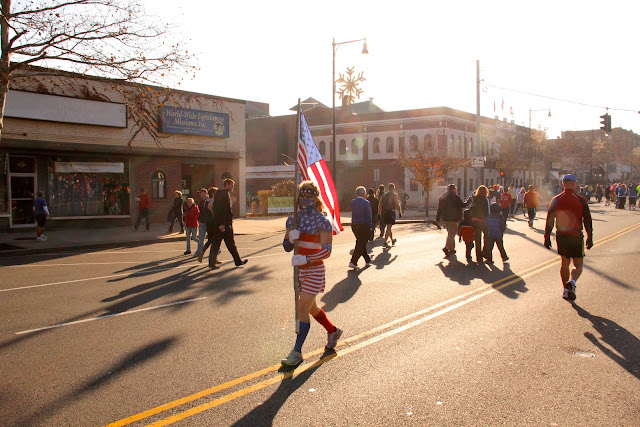 Flag man signed up for the Best Costume contest. 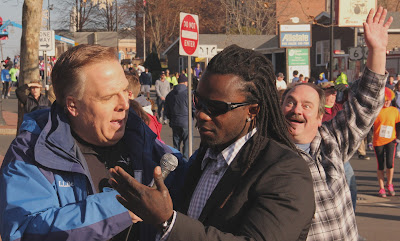 Joe Furey is a local TV weatherman.  He lost a lot of weight through a fitness program, so he ran the race to celebrate the weight loss.  He interviewed his personal trainer on camera.
A spectator behind them got excited about being on TV. 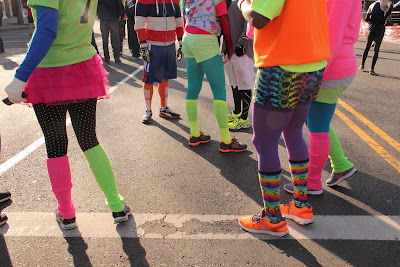 It is very colorful. 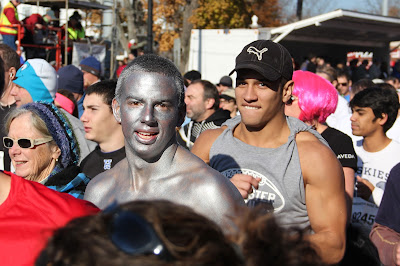 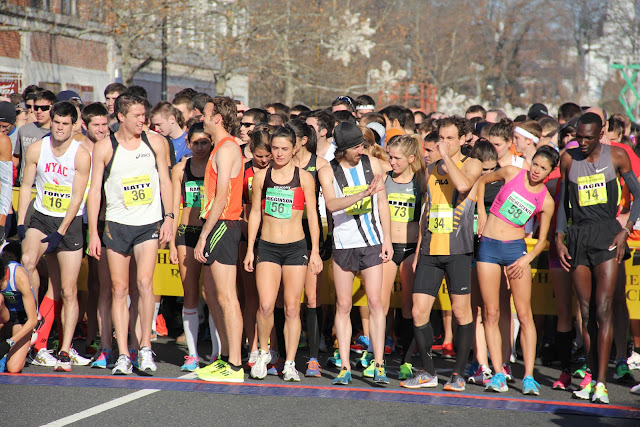 There are 15,000 runners.  The woman in pink, stretching on the right, is Delilah DiCrescenzo.
She was the fastest woman finisher.  Aaron Braun, in orange and turned sideways, won the race. 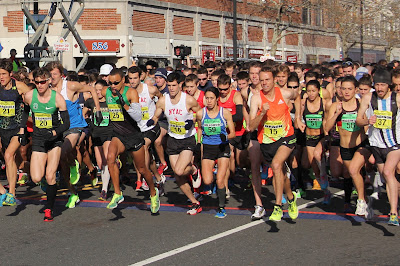 Braun got off to a good start and was in the lead most of the race. 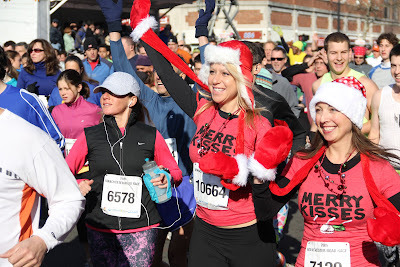 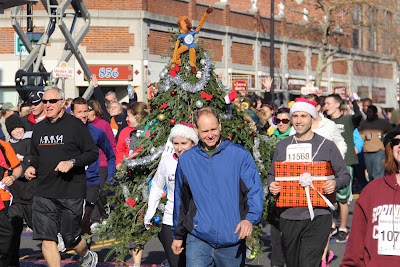 One guy ran the whole five miles dressed as a 35-pound Christmas tree. 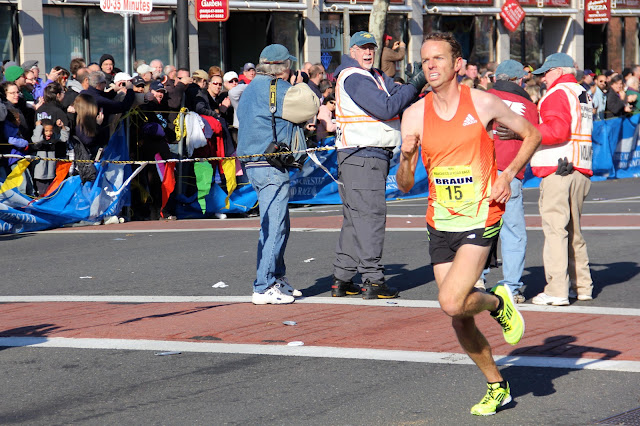 It must be embarrassing if one came in slower than the tree. How could you explain that you were in a race and lost to a tree?

I realize that runners are a very hearty bunch but, I had to admit that a little shiver ran through me when I saw that picture of all of the runners lined up in those skimpy clothes. Brrrr...I don't think I could do that.

What a great event! Looks like a lot of fun, and that all the participants are winners. Nice work in capturing all the fun.

This makes me tired just reading about it.

I'm with you. Stand by with camera. Record event.

A colorful collection of colorful characters. Seems that many marathons were held over the holiday but most were named "Turkey Trot"...

Love the Christmas tree, oh my I bet he/she ( how can you tell) was hot at the finish line!. Nicely recorded here Jack.

What a fun day -- including a racing Christmas tree!! Great captures for the day, Jack!! And you had sunshine!! Enjoy your weekend!!

Really nice work capturing the flavor of the whole event! Next year I hope to be running in a race myself, so this was inspiring. ;-)

The excited man is great.

- where it is now known as M2.
If you would like to - please do re-follow there!
Lucy

Great shots, Jack! It is always great fun to watch a race like this (or to run it -did you?).

Despite the track outfits, I would think that's a really cold run! Meanwhile...back in the kitchen, someone is preparing the meal!

Looks like great fun. I loved when Lois was running 'cause the people were very enthusiastic, wore great colors, and the energy was high.

15,000 is a very good turnout! Looks cold, but probably just about perfect for running!

Quite and event and well documented. Looks like it was either a warm day or the runners were counting for high metabolism.

I would think it would be really cold for shorts. I participated in our local Turkey Trot, unfortunately I came in last in my age range.

Great shots and thank you for sharing with us.
BShell

It looks like everyone had a good time. Love all the colorful costumes! :)

Ha ha, running like a Christmas Tree, that is a new one, some great photos here, nice day for it.

A lot of action and some nice and colorful pictures!