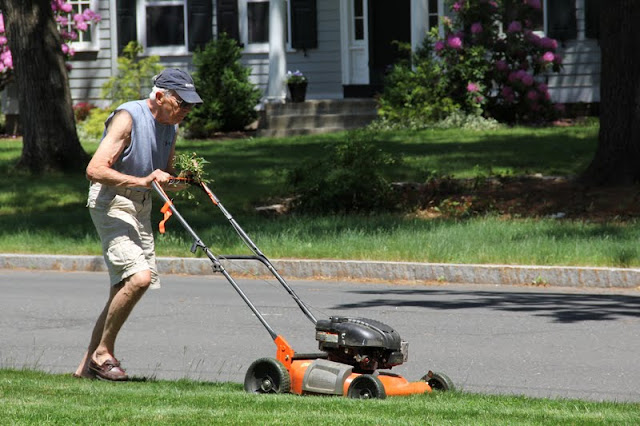 You met Jack last winter when he was shoveling snow.  Jack had his 80th birthday a few days ago.  He does yard work nearly every day.  Now is the season for Jack to mow the lawn and pull weeds.  (At the same time.) 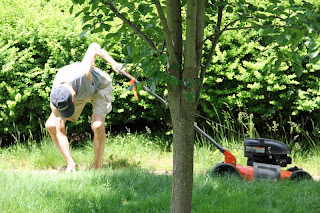 When Jack saw me taking his picture, he went inside to change his clothes. Jack wanted to have his picture taken in a Northwestern cap and shirt.  Two of  Jack's granddaughters are lacrosse stars at the national level.  The older one played on the Northwestern lacrosse team that won college's national championships four years in a row, and the younger one plays on the current team that won the national women's lacrosse championship last weekend. 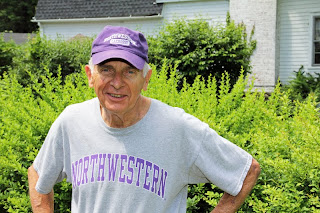 After I wrote this post, I went back outside.  Jack was back in his work clothes, balancing a huge ladder against a tree and trimming the lower branches.

After dinner, Jack decided he needed more exercise, so he climbed on his bicycle and went out for a five mile ride. 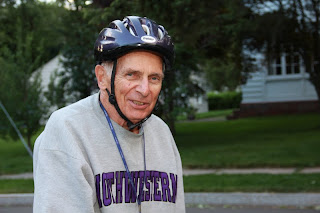 And you think YOU are active and fit!
Posted by Jack at 5:53 AM

I haven't half of his energy...

Well, happy belated birthday!! The photos are terrific, Jack; you're my kind of man!!

Good for him... he'd make my wife happy!

I need to show this to my Dad, Jack (yes, a Frenchman named Jack too). Maybe he'd start doing things.

Hello to you Jack in Hartford and happy belated birthday!

Good for him! Great photos of an inspiring man.
I understand you had a birthday. Happy Birthday!

You two are quite a 'pair of jacks'. Inspiring post.

It sounds like physical activity runs in his family! Good for him!

Jack looks to be doing well. I hope after that bike ride he played a round of golf!

Go Jack! This will be my husband. He woke up at 6 on this Saturday morning to go for a run. Then he will mow, do tractor chores, cow chores, etc... all before lunch.

Keeping busy is a happy way to spend the day. Go Jack.

And all that with a smile!!happy birthday !

A prize pair of "Jacks" indeed! He is definitely an inspiring neighbor to have! A belated Happy Birthday to him and a thank you for another fun, interesting post and photos! Enjoy your weekend, Jack!

I hope that I am like him when I am that age! He's a good example of "use it or lose it".

He looks very fit - and a really nice chap too. An inspiration to keep going!

Well now I'm officially ashamed of myself. What an inspiration!

Jack is amazing! I wonder what he was like BEFORE he started to slow down. :)

I hope I'll be as fit and as successful as he is when I reach 80. Successful as in financially stable and having successful and happy children and grand children.

Jack puts me to shame. I need to get out and DO more stuff! - I love the photo of him cutting grass and pulling weeds. That man is a go getter and an inspiration!

Jack and Kitty- Thanks for looking out for Jack and Ellie from across the street and through your lens. Dad is something else. When he is not seeing patients 4 days a week, writing Dental Journal articles, preparing meals for his wife of 56 years, working on his Twelve Trees greenhouse property, staying in the lives of his brothers and their families in Pittsburgh PA and 10 children and 19 grandchildren. He checks in on his retired military command alums to remember the life he had before West Hartford. On top of this, driving to Long Island to watch granddaughter Alex win her second college national championship. Driving to Boston to make holidays easier for the families of his daughters Leslie, Kathleen and Susan and enjoying brownies from the neighbors children to take the time to enjoy birthday number 80, which he celebrated on May 31. I guess he still mows his own lawn and shovles his on driveway as the seasons change.

This guy is a straight up inspiration and role model for all of us. I'm in awe and have hope for my own aging process.

Now I know where I get my motivation to run & bike to/from work every day. I wish my dad (Jack's son) was in the same shape... Physical & mental health are important requirements for a happy, healthy & loving life. Be sure to eat well too… including Gram's apple crisp from time to time ;)

Way to go, Jack! He's an inspiration. (Unfortunate choice of attire, though.)