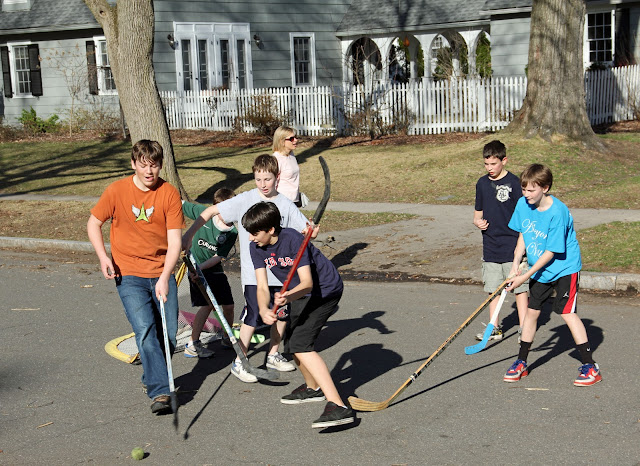 Yesterday it was 70 degrees in Hartford.  The kids came out of their houses and a game of street hockey was on!
Posted by Jack at 6:06 AM

Amazing change in temperature I imagine. This looks almost like a summer afternoon! We had the same kind of temperature 2 days this week and are back to grey and cold. And I caught a cold! :-)

Where did all of that snow go? I imagine that it is great to see the pavement after the frigid winter... Did you play, too?

It snowed in Haninge yesterday. But I'm hoping it will melt away today. Looks like street hockey is still popular.

I love to see kids outside playing in this day and age. Am I sounding old? Anyway, nice capture of a scene not seen often enough (in my humble opinion).

We hit 70 this week too. Suppose to rain all weekend now. I bet those families were happy to have the boys playing street hockey and releasing their energy outside.

Michele Obama would approve of the kids getting out from behind the computer and outside getting some exercise.

It looks like one of these players is risking getting a penalty for high sticking.

Playing (nearaly anything) on the street is so much fun! :)
God bless you!
Cezar

Great to see those kids out enjoying the weather!

I just popped over from Portland daily photo. What a difference a few miles makes. Glad you are getting some spring weather.

Lucky you! Here it was 48 and very cloudy!
Thanks for sharing your beautiful pic with merry children playing in the sun;o)

Great stuff. I used to love playing street hockey as a kid. They all look like they're having so much fun.

Great shot of carefree times! That is really warm - lucky you.

The weather looks nice, but the game looks rough!

We had elephant ear plants at our old house in Ocala. But they had no blooms. I don't think. I just called them the "blooming elephant ears"!

WEll I can tell you that I think it's terrific that these kids are having so much fun without equipment, coaches, schedules, and pushy parents! ha. This looks like a scene from several decades ago. Bravo!!!
V

Almost a summer view! but the nacked trees behind and the ground are telling the true! Here kids would play football (=soccer for you), NEVER hockey!

It's great to see neighbourhood kids playing together and good that it's safe to play on the street. Like Malyss says of France, it would be football over here in England.

Beautiful Picture. I was just blog walking and found your blog.

Following you and looking forward to enjoy your daily pictures.

A great shot, full of action!